Carlos Torres helped start the Rincón Criollo Community Center in 1976, when he and his neighbors carted away the rubble strewn around the corner of 158th Street and Brook Avenue in the South Bronx. Rincón Criollo has since flourished as a vibrant community center and green space for the Melrose neighborhood. “We’re a cultural center where everyone is welcomed,” he said.

Now, as dump trucks line the streets of the South Bronx and construction cranes loom overhead, Torres and other local residents worry about what will happen to a neighborhood they helped sustain long before it became a destination for the city’s next wave of gentrification. Rincón Criollo gardeners are trying to avoid what happened to the nearby Family Group Garden and Latinos Unidos Gardens, which were forced from their former homes into a smaller combined lot.

“Rincón is legendary, and it’s shameful how they have been treated,” said Marty Rodgers of the South Bronx United Gardeners. 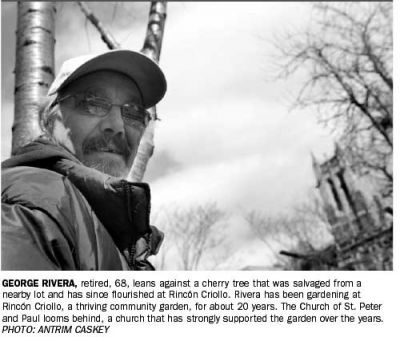 The City’s plan for the area, the Melrose Commons Urban Renewal Plan, would have bulldozed these open spaces and uprooted longtime residents from their homes. This would have resulted in major changes to area and displaced thousands of residents and hundreds of local businesses. For the past dozen years the Melrose neighborhood has been in constant danger of having developers take over its 35 square blocks to build new housing that most area residents couldn’t afford. In opposition to these forces, community groups such as Nos Quedamos and More Gardens! have been fighting on behalf of local residents. But many residents are afraid that these plans will prevent them from continuing to live in their neighborhoods; that gentrification will force out low-income and minority residents and rob the neighborhood of its identity.

The problems of the South Bronx can be traced back to the 1960s, when several stable working-class neighborhoods were destroyed to build the Cross Bronx Expressway, and most of the area’s middle-class residents moved north to the Co-op City complex. In the 1970s recession, as municipal services were cut and crime, unemployment, and oil prices rose, landlords abandoned whole blocks of buildings, often hiring arsonists to burn them down so they could collect insurance. Thirty years later, 29 percent of the Bronx’s residents spend more than half their income for housing, the highest proportion of any borough. The South Bronx in particular remains one of the city’s poorest areas. Surrounded by three major highways, it has a high incidence of asthma, and according to the NYC Department of Health, local residents are 20 percent more likely to die from chronic lung disease as compared to New York City as a whole.

Yet while the South Bronx was burning, Rincón Criollo was sprouting. The community garden was started and a casita (little house) was erected in 1976. Rincón Criollo is also a center for music workshops, concerts, and festivals, and the casitas serve as a reminder of the Puerto Rican countryside, where many of the neighborhood’s residents spent their childhood. It also provides an open green space where locals can grow healthy foods in an area that has no supermarkets.

The gardeners have been meeting with city agencies and officials such as newly elected City Councilmember Maria del Carmen Arroyo, trying to persuade them to adopt the “Homes and Garden Plan” a proposal by community and housing experts showing how both gardens and housing can exist in the Melrose neighborhood.

With Rincón Criollo’s future still in limbo, the gardeners are staying where they are and preparing their lots for the spring. “We’re working now. Sometimes to nine o’clock,” said Felix, one gardener. “We’re not moving. You see that we’re working.”

“We will back Rincón Criollo in any decision they make.” Aresh Javadi of More Gardens!