Call it The Wall. A two-mile stretch of prime north Brooklyn real estate developed into a towering row of luxury condominium buildings that range in height from 150 to 350 feet, effectively cutting off the existing Williamsburg and Greenpoint neighborhoods from the East River waterfront. This is the future of the industrial strip of land that hugs the river, as envisioned in a massive rezoning proposal put forth by the Bloomberg Administration’s City Planning Commission. Not surprisingly, hordes of opposition to the proposal has been organizing for the past few years, ever since the administration’s plans were made public. 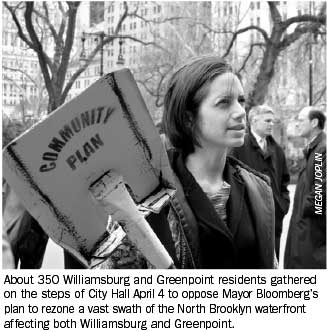 What really sticks in the craw of community activists is the Bloomberg plan’s disregard of the (197-a) planning documents (so named for the section of the city charter allowing communities to develop their own development plans) formulated by a coalition of residents and members of Community Board 1, which serves the two north Brooklyn neighborhoods. Those plans, which were formulated over several years – up to 15 by some accounts – differ significantly from the Bloomberg plan, which itself claims to build on the principles put forth by the (197-a) plans.

Joe Vance considers that declaration a laughable conceit. “The (197-a) calls for a rezoning towards residential. Beyond that it’s hard to see any correlation,” says Vance, a member of the Greenpoint Williamsburg Association for Parks and Planning (GWAPP), a coalition of 40 community groups that have been lobbying for the community plans’ adoption. Organizations like GWAPP see a laundry list of problems with the Bloomberg plan: the complete lack of guaranteed affordable housing, one quarter the amount of park land as recommended by the city government’s own standards, and buildings whose size would be grossly out of context with the existing neighborhood. Vance also says the Bloomberg plan is driven by the mayor’s desire for a waterfront park to help sell New York City to the International Olympic Committee, and the prospect of possibly providing one-third of the 60,000 housing units he aims to bring to the city, in one fell swoop.

The (197-a) plans call for a guarantee of 40 percent of the new housing to be designated affordable to current residents, whose median income hovers around $27,000. They also make provisions for small businesses and light industries, such as metal shops, furniture outlets and lighting manufacturers. The height of the tallest buildings would also be capped at 200 feet, 150 feet lower than the tallest buildings in the Bloomberg plan.

Community groups like GWAPP and the Williamsburg Warriors have spent the last few months lobbying City Council members hard in favor of the (197-a) plans, or at the very least, a compromise between the two. Chris Zucker, a Brooklyn native and resident of Williamsburg for the past three years, admits that he only had a rough idea just how drastically the proposed zoning plan would change the character of his neighborhood until relatively recently. Along with the two other members of the Williamsburg Warriors, Zucker grew into neighborhood activism, spending his energy convincing the disparate demographics within the affected neighborhoods – Polish, Latino, hipster – of the destructiveness of the Bloomberg plan. “I just don’t feel like being priced out of every neighborhood I’ve ever lived in,” says Zucker.

Activists see the gentrification of Soho as an ugly precedent to what might happen to their neighborhoods should the Bloomberg plan go through.

Council Member David Yassky, a Democrat who represents the affected neighborhoods, has already come out against the Bloomberg plan, but stops short of full endorsement of the (197-a) plans. “The community plan is much closer to our idea of what the community should look like,” said Evan Thies, a spokesman from Yassky’s office. “But we’re willing to reach a compromise where we get more affordable housing and more open space.” Meaning, essentially, that Yassky’s office believes future affordable housing needs will inevitably precipitate the construction of buildings significantly larger than those currently in the neighborhood. Says Thies: “We have to allow for some larger buildings in order to facilitate the number of affordable units we need to sustain that community.”

Compromise is not taboo, at least not to Vance, who says that GWAPP has been trying to find some common ground with the city for the past two years. “What we’d like to see happen is some real negotiations with the city, some true movement towards where we are,” he says. But Vance is not buying in to the city’s argument that affordable housing is unattainable without residential towers crowding out the waterfront. He says that buildings 15 to 20 stories high with 30 percent of the housing designated affordable are a feasible option. “They’re real numbers – they work. The city just doesn’t want to believe the numbers because they’re too beholden to the development community.”

The Bloomberg plan has already suffered several small defeats, having been condemned by Community Board 1, Brooklyn Borough President Marty Markowitz, and Betsy Gotbaum, the public advocate for New York City. However, on March 13 the City Planning Commission voted in favor of the Bloomberg plan, a decision that is hard to consider a surprise considering the agency was voting on their own proposal.

Warriors Eve Sibley and Siri Wilson were part of those who crowded the steps of City Hall during a seven-hour public hearing on the plans held April 2. “Our council members knew there were 300 people at the hearing, maybe 400, and that’s nothing compared to the number of people we’re going to get involved,” said Sibley. The plans must still go through various committees before the 50-day City Council review process expires on May 3. It is expected that the council’s adoption of a rezoning plan will occur sometime in May.