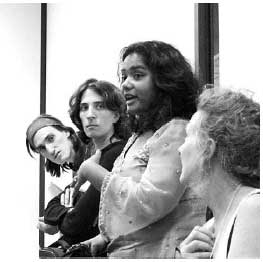 St. LOUIS—On April 6, 1846, Dred Scott, a slim, mustachioed slave in his mid-forties, walked into the courthouse here and filed a lawsuit demanding freedom for himself and his wife, Harriet. In 1857, the U.S. Supreme Court denied his appeal, holding that slaveholders had the right to traffic in members of the African race, “like an ordinary article of merchandise and property.”

On the weekend of May 13-15 this year, 2,200 people packed a hotel conference room two blocks south of the old St. Louis courthouse for the National Conference for Media Reform. Organized by Free Press, the event was dedicated to the proposition that news is too important to a democracy for the media to be trafficked like an ordinary article of merchandise and property.

The press is “the weak slat of democracy,” said Janine Jackson of Fairness and Accuracy in Reporting, quoting A.J. Liebling during the opening plenary session. “Bad media hurts real people. Black and brown kids go to jail because of what someone read in the media about ‘superpredators.’” Later that day, Naomi Klein paraphrased Upton Sinclair to speak of an “invisible concrete wall” that blocks out important issues and “makes it OK to be ignorant.” The media “amplification machine,” she added, decides which stories are worthy of outrage; it decreed that the torture at Abu Ghraib was a “fraternity prank” – and it “got a lot of help from the Kerry campaign.”

Criticism of the mainstream press for being more plutocratic than democratic is not a new thing, but the current media-reform movement dates mainly from the mid-’90s, when the number of corporations dominating the media dropped to single digits, the Telecommunications Act of 1996 ended the 40-station limit on radio-chain ownership – enabling Clear Channel to amass more than 1,200 stations – and the Federal Communications Commission (FCC) crushed the fledgling pirate-radio movement. By 2003, when the Bush FCC tried to ease the limits on TV-station ownership, a wave of protest from both left and right stopped it – but Congress sneaked a partial increase into another bill.

Free Press itself was founded by two Midwesterners, media critic Robert McChesney and The Nation writer John Nichols. The 2,200 people who came to St. Louis was more than double the number that turned out for its first conference, in 2003. The attendees ranged from anarchists to Democrats, teenagers to octogenarians, hippie-ish women in long skirts and sneakers to suited policy wonks. They came from all 50 states and several countries, with the Midwest most prominently represented. This was a crowd where people clamored to get their picture taken with George Lakoff, where Amy Goodman, Naomi Klein, and Bill Moyers drew whoops and ovations upon taking the stage. Dozens of groups and publications – the Alliance for Community Media, the Campaign for Commercial-Free Childhood, Independent World Television, Chicago Media Action – tabled in another room.

Working-class people were less in evidence; the hotel rooms cost $82.70 a night. And though the conference was more multiracial than it seemed during the opening plenary, which resembled a reggae show in Vermont – the black women on stage almost outnumbering those in the audience – it was still predominantly white.

People’s biggest motivation for coming seemed to be the sense that the corporate media prevent information on crucial issues from getting out to the public. “We have to have a free press to have a democracy,” said Anita Staengl, a “raving radical and very angry citizen,” Democratic activist, and “child of the ’60s” from Alachua, Florida. “People need to hear the truth to protect our rights against corporations and hold our government accountable for the horrible war crimes they’re committing.”

“I always knew the media was screwed up,” said LaWanda Newley, 51, a peace activist from Huntsville, Alabama, but she was particularly irked last month, when her group put on a benefit to raise relief funds for Iraqi civilians and the families of American soldiers. “We called all the media in Huntsville, and we got no coverage whatsoever.” Warren Popp, a 21-year-old student at St. Louis Community College, worked for Rep. Dennis Kucinich in last year’s presidential campaign, a “constant uphill battle” after the media decided that Kucinich was not a serious candidate.

“We need to create a countervailing force to the homogenization of both art and what passes for news,” said John Connolly, head of the American Federation of Television and Radio Artists. Another labor leader, Nestor Soto of the Puerto Rican journalists’ union UPAGRA, said that when Univision took over Puerto Rican TV in 2001, it cancelled all but two of 50 locally produced programs.

Identifying the problems with corporate-dominated media is one thing. What to do about them is another, and the conference saw some tension between “reform the media” liberals and “be the media” radicals. The “reform” side concentrates on government-policy issues, such as the FCC’s ownership regulations, aborting the far-right takeover of PBS, and the forthcoming revision of the Telecommunications Act. The “be” side, seeing no hope for the corporate media, follows Liebling’s dictum that “freedom of the press is guaranteed only to those who own one” and would rather build Indymedia-style grass-roots outlets.

“The intersections between these two impulses are more important than anything that’s happened at this conference,” said Maggie Ellinger-Locke, 22, an ecofeminist and occasional St. Louis Indymedia activist.

A third element of the movement is activists calling for “media justice,” for getting poor, Black and Latino people a voice in the press. Without racial justice in society as a whole, San Francisco-area youth organizer Malkia Cyril told the conference, there never can be a “free press.”

One group, affiliated with the liberal government-reform group Common Cause and Danny Schechter, has concocted a “media Bill of Rights,” stating that media should provide an uninhibited marketplace of ideas, use the public’s airwaves to serve the public’s interest, and reflect and respond to local communities.