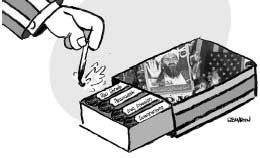 Leave it to the Bush administration to fulfill the dream of Islamic holy warriors. It is uniting Muslims across the world in anti-American hatred. The latest grievance is the reports of U.S. prison guards desecrating the Koran at Guantanamo. The White House thought it had flushed the story by getting Newsweek to retract it on a technicality, but the controversy prompted a flood of evidence that U.S. forces use desecration of religion as a weapon of war.

The result was days of protest across Afghanistan (half the prisoners in Guantanamo are reported to be Afghani) with 15 people shot dead by U.S.-trained and equipped police forces. The anger quickly spread across the Muslim world, with demonstrations in Palestine, Pakistan and Indonesia.

The New York Times came to the shocking conclusion that “Guantanamo comes to define the United States to Muslims.” One editor of an English-language paper in Pakistan noted that the prison camp in Cuba is “evidence of how America and the West makes the war against terrorism synonymous with the war against Islam.” He added that “The tenor of the debate is acquiring ‘civilizational’ dimensions.”

The idea of two civilizations on a collision course is absurd. The Muslim belt, stretching from northwest Africa to the Pacific Ocean, encompasses hundreds of ethnic and linguistic groups, diverse cultures and myriad interpretations of Islam. But the Bush administration is bringing them together.

There may not be two worlds, but there are two worldviews. Most Americans now oppose the Iraq War. But appeals to fight terrorism and support-the-troops guilt-tripping effectively mute most criticism. It’s not lost on Muslims that U.S. foreign policy in their countries comes down on the side of dictators, repression and occupation, giving new vigor to pan-Islamic protests.

According to the Website atimes.org, Islamic movements are planning mass protests for May 27 in 25 countries, including Afghanistan, Saudi Arabia, Pakistan, Malaysia and Indonesia. This is not just a religious struggle. The Koran-in-the-toilet story may have been the spark, but fuel is poured on the Muslim world’s discontent daily – whether it’s the Western occupations of Palestine and Iraq, regular U.S. bombings in Afghanistan and Pakistan, saber-rattling against Syria and Iran, or torture stories from the Guantanamo franchises around the world. Muslims are also aware of the 13,000Arabs and South Asians who have been deported from the United States on flimsy grounds since 9/11.

In Afghanistan, the protests came after President Hamid Karzai announced on May 8 that he wanted a “strategic partnership” with the United States, meaning that he would roll over to Washington’s demands for permanent military bases throughout the country. The protests that started on May 11 quickly took

on an anti-occupation tone, with demonstrators burning U.S. flags and demanding that American forces leave Afghanistan (where they have a mini-Guantanamo at the Bagram airbase). Yet when Karzai visited Washington on May 23, the “partnership” was reaffirmed: a relationship that involved Bush rejecting

Karzai’s plea to turn over Afghanis in Guantanamo, and the Afghani agreeing that the Pentagon would have a free hand to conduct combat operations.

The Bush administration realizes its policies are backfiring, but it can only offer comical PR maneuvers, such as dispatching the First Lady to the Middle East. In Egypt, Laura Bush said Hosni Mubarak’s plan to allow an opposition candidate to run against him in September’s presidential race was “wise and bold.” That may play well in Peoria, but Mubarak is a pharaonic thug who oversees a vicious police state that receives billions in U.S. aid, and observers agree that he has already rigged the contest to ensure his 24-year rule remains untouched. (Egypt is also one of the many countries where the United States practices “rendition”: shipping detainees there so they can be held and tortured in secret.)

Nor did it escape many that the May 12-13 bloodbath in Uzbekistan, in which hundreds of people were slaughtered, was perpetrated by Islam Karimov, another strongman propped up by Washington. Karimov oversees a nepotistic regime of terror that runs a mini- Guantanamo where prison conditions include rape, slave labor and being boiled alive. His nation also hosts a large U.S. military base. He is also notorious for brutally suppressing practicing Muslims, even those who are nonpolitical. According to many human-rights groups, having a long beard in Uzbekistan is enough to be disappeared and tortured to death.

The epicenter for the conflict is the Middle East, of course, which plays into 2,000 years of Christian end-times prophesizing. Syria has announced it will no longer do dirty work in the “war on terror,” whether that’s supplying information or graciously offering to torture U.S. detainees. Then there is the ever-present bone in the Muslim (and Arab) throat: the Israeli occupation. Finding a new Palestinian to police the occupation has pushed the struggle out of the Western eye, but media in the Islamic world still show the apartheid wall being built, the land grabs occurring, and the economy and people being strangled by an Israeli-enforced humanitarian disaster.

The U.S. appears headed for a showdown with Iran, but it has few military or diplomatic options. Its ground troops are indefinitely bogged down in Iraq, and bringing painful sanctions to bear on Iran, such as stopping the export of hydrocarbons, would only cause the global economy to crash.

Four years into the war on terror, the Bush administration is locked into a strategy that brooks no retreat. While we are a long way from the devastation that marked the wars of the last century, we are on the same path.