Standing in front of a picture of himself as a young man charred to a crisp by the atomic bomb that exploded over Hiroshima 60 years ago this summer, Tsuboi, 80, recently explained why he traveled to New York for this month’s marathon negotiations at the United Nations over the fate of the nuclear Non-Proliferation Treaty (NPT).

“I came because nobody deserves a life like I had,” he said. “We had to carry the pain for our entire lives.” 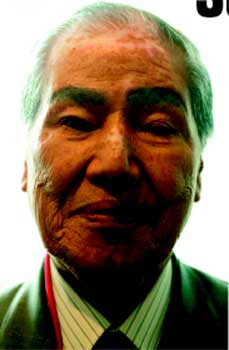 Tsuboi, co-chairman of Hidankyo, a confederation of Japanese A-bomb survivors, was one of the first people in Japan to break the official silence about the plight of A-bomb survivors who continue to suffer high rates of cancer decades after atomic bombs were dropped on Hiroshima and Nagasaki in August 1945. Over the years, he has endured heart disease, chronic anemia and cancer of the large intestine, part of which he had removed eight years ago. He was most recently in the hospital in mid-April.

Tsuboi joined about three dozen other aging survivors (or “hibakusha”) of the Hiroshima and Nagasaki bombings who traveled to New York at the beginning of this month to try and put a human face on the momentous yet seemingly arcane issue of nuclear weapons proliferation.

The hibakusha, many of whom are ill, fanned out across the city for several days to speak about nuclear disarmament at local high schools and universities, at churches, Buddhist temples, diplomatic receptions and a May Day peace rally at Central Park.

When I found Tsuboi and some of the other A-bomb survivors, they stood in front of a small exhibit in the first-floor lobby of the United Nations building, taking turns speaking with curious passers-by. In spite (or perhaps because of) their suffering, they were free of anger or bitterness. They had consciously chosen to become the peace they wish to see in the world.

“The person who overcomes hell becomes kind to other people,” Tsuboi explained. “It’s the people who don’t smile who haven’t suffered enough.”

“Their modesty is so amazing. They never come to accuse anyone,” added Magumi Hill, 43, a volunteer translator.

Meanwhile, diplomats from around the world were locked behind closed doors unable to even agree on an agenda. Tsuboi was clear about what they should be discussing.

“This evil thing [nuclear weapons] must be destroyed by human beings,” Tsuboi said. “We all have different political and economic systems, but we must come together to solve this problem. We must have a dialogue even if it takes a very long time. Only then will we find peace.”