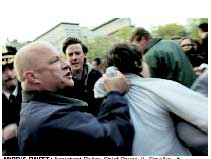 February 1999: Smolka is head of the Street Crimes Unit that pumped 19 bullets into unarmed African immigrant Amadou Diallo. The notorious unit – some members reportedly wore T-shirts proclaiming that “there is no hunting like the hunting of man” – was disbanded in 2002, but Smolka received a promotion.

Feb. 15, 2003: Smolka orders police on horseback to charge peaceful antiwar demonstrators, after Mayor Bloomberg denied them the right to assemble at the United Nations.

April 7, 2003: Smolka sends 300 riot cops to arrest approximately 100 nonviolent protesters in front of the Manhattan headquarters of the Carlyle Group, a military contractor with ties to the Bush and bin Laden families.

May 2003: Smolka kicks a woman in the head while she is participating in 3 days of civil disobedience to protest “special registration” of Muslim immigrants, according to Racial Justice 9-11, which organized the protest.

August-September 2004: Smolka is co-chair of site security for the Republican National Convention. In one week, 1,806 people are arrested, starting with 264 at Critical Mass. Video evidence captured by activists has so far has cleared over 400 arrestees.

December 2004: At a court hearing, Smolka claims that as few as seven bicycles riding together constitute a “procession” and is illegal without a permit. (He says seven cars or trucks are “traffic.”) The city’s request for an injunction that would prevent Critical Mass from occurring without a permit is denied, but repression continues, with 37 cyclists arrested in March and 34 in April – some grabbed personally by Smolka.