Radiac Research Corporation, headquartered in a low-slung building on Kent Ave. in South Williamsburg, has an innocuous enough appearance. But the sleepy one-story building belies the danger housed inside its brick walls. Stocked with barrels of some of the most poisonous and toxic chemicals known to man, as well as low-level radioactive waste, an accident in Radiac could easily trigger one of the worst environmental disasters New York City has ever seen, says Sean Nagle, the health and research director of activist organization El Puente Community Health and Education Institute. 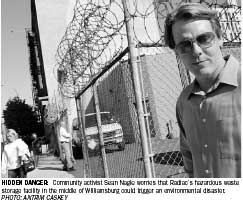 “Depending on which way the wind blows, you’re talking about a radius of three miles from Radiac,” says Nagle, who lives three blocks away. “You could take out both airports, lower Manhattan and parts of Brooklyn.”

Since the late 70s Radiac has been permitted by the New York State Department of Environmental Conservation (DEC) to serve as a short-term storage site for containerized hazardous waste before it is shipped off for treatment, recycling or disposal. But it also has a separate permit issued by the State Department of Labor to handle low-level radioactive waste – things like test tubes, syringes and clothing that have come in contact with radioactive material.

Of major concern to activists and residents is the possibility that a fire beginning in the hazardous waste section of the site could easily leap to the adjoining radioactive waste storage space, transmuting the entire facility into a de facto dirty bomb. “It’s pretty much the synergy of the two together that makes everybody scared,” says Nagle.

An environmental impact study commissioned by the NYC Department of City Planning during the recent north Brooklyn rezoning process noted that the site “has a long list of RCRIS violations,” referring to the Resource Conservation and Recovery Information System, a database operated by the Environmental Protection Agency. According to the study, Radiac has been cited for violating both general standards of such a storage facility, as well as preparedness/prevention requirements.

The lax approach to securing the waste safely is something that troubles Deborah Masters greatly. “A person with ignoble intentions would have no trouble from the minimal security measures Radiac employs,” says Masters, chair of the environmental committee of Community Board 1. “It would be so easy to start a fire while walking by the building.”

Those opposed to Radiac’s presence are in the midst of lobbying the DEC not to renew its hazardous waste materials permit, which is currently under review. Activists like Nagle and Masters hope that getting enough people to a May 23 public hearing before the DEC will convince the agency of the inappropriate location of Radiac.

El Puente’s Nagle believes that without the hazardous materials permit, the monetary incentive for Radiac to remain in Brooklyn will evaporate. “I think they’re just trying to stay here as long as they can, until it’s not in their best interests anymore,” he says.

For years, the minority and low-income residents of Williamsburg have played unwilling hosts to a bevy of environmental injustices: power plants, sewage treatment facilities, failed attempts to relocate garbage incinerators and a highly disproportionate number of waste transfer stations. The staggering environmental injustice is enough to frustrate anyone, including Masters.

“It just seems like [the residents] deserve better,” she says. “It’s very disheartening to me that all this money is being spent on homeland security while Williamsburg is being ignored. It’s just bullshit.”

A legislative public hearing for public comment on Radiac’s hazardous waste permit will be held on May 23, 2005 from 4 p.m. to 6 p.m. and again at 7 p.m. at Public School 84, 250 Berry Street (between Grand Street and South First Street) in Brooklyn.