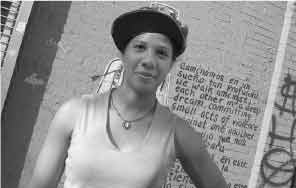 Ever since Slick Rick dropped “A Children’s Story,” hip-hop has been a story-telling form, telling tall tales while “keeping it real.” This is a truth not lost on hip-hop activist turned novelist Sofia Quintero. Writing under the pen name Black Artemis, her second novel Picture Me Rollin’ reclaims the insurgent radical politics once common in hip-hop. It’s no small task cutting against the current flood of crass commercialism and misogyny in big media hip-hop, but self-confessed “bona fide hip-hop purist” Quintero considers herself up to the challenge.

An Afro-Latina raised in the Soundview section in the Bronx, her first memories were of her brother sneaking out to golden age hip-hop parties at Morris High School. Instead of becoming an MC, she decided to study public policy at Columbia University until she went through a “creative recovery.”

After writing a number of screenplays, Quintero turned to the creative nuance of fiction. Her first novel, Explicit Content, examines the challenges of sisterhood in the face of hip-hop capitalism. In Picture Me Rollin’ her main character’s obsession over Tupac Shakur serves as a meditation on the current crisis in hip-hop. For Quintero, hip-hop, like Shakur, is at a crossroads. “There are many contradictory impulses in hip-hop between revolution and being a gangsta. While trying to be a ‘revolutionary but gangsta’ is desirable, we can’t go both ways” Quintero told The Indypendent.

The pop-novel form has also been a means of broadening socialist and feminist ideas to new audience. However, Quintero is quick to make a distinction between her work and the real-street-life literature by writers like Iceberg Slim and Zane. “Just because it’s urban, doesn’t necessarily mean it’s hip-hop.” Still, she does share the DIY spirit of her street life counterparts.

Quintero is taking her book tour to alternative and people-of-color spots across the country, while organizing Chica Luna Productions, a women’s artist collaborative. In writing novels, she hopes to spark dialogue about the direction of an art form so integral to her development. “I don’t want to forget that hip-hop comes out of the experiences of the children of the damned. We need to reconnect and pick up that struggle.”