Zigun and his organization have been a major force behind Coney Island’s revitalization. Coney Island USA is behind the sideshow, the museum, the burlesque show, the annual Mermaid Parade, and “anything creative” that happens on the island. The arts nonprofit was formed in 1983 and is funded by private arts and cultural foundations, public government donors and local businesses.

Zigun declares the whole spirit of Coney Island is rooted in the historic amusement parks and his establishment, which he unabashedly claims to own “one hundred percent.”

Indeed, Coney Island exhibits the rarest of cultural commodities – authenticity. Whether it’s the glorious trashiness, the primitive levers of the Cyclone that hold your life in the balance, the carnival art, the intense and diverse crowds or the vintage boardwalk. 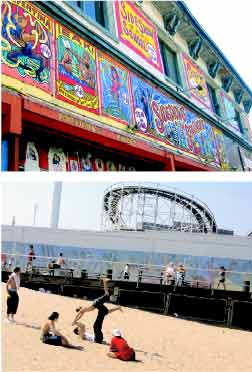 But amid attractions ranging from electric chairs to sword-swallowers, a new concern looms over Coney Island. The mayor-appointed Coney Island Development Corporation (CIDC) has drawn up plans to develop many of the amusement area’s vacant lots. With property values skyrocketing, residents, beach goers, small-business owners and arts organizations are wondering how they factor in the development plans.

The city’s hazy plans coupled with even hazier private enterprise leaves the future of Zigun’s arts organization and Coney Island itself a mystery. After 22 years, Coney Island USA has become a fixture in the community and in local politics, but Zigun is struggling with a rent hike and his landlords’ refusal to offer a customary 10-year renewal lease.

‘EVERYTHING IS FOR SALE’

“There are no leases left in Coney Island. Everything is for sale… and if property keeps going up per square foot, imagine maintaining a large theater and museum space,” laments Zigun.

But almost two years after Mayor Michael Bloomberg announced plans to develop Coney Island, the oceanfront neighborhood is still in limbo. “Everything’s up in the air,” says Zigun.

Even residents of the community know only what they’ve read: “I probably know as much as you,” says Mike, a resident of a housing project on Surf Avenue, who adds that his monthly rent increased $300 last year alone.

Michael Harari, a broker for Massey Knakal Realty, told the Brooklyn Papers that vacant lots have doubled in price since last year.

In the meantime, small businesses along Surf Avenue have been bought up by Thor Equities, a developer that specializes in building malls.

Though the future of Coney Island is uncertain, many small business managers know the end is near.

The Go-Kart track on 12th street is among the facilities that will have to abandon their locations by the end of this summer under Thor’s command, but seven-year manager Charlie “Go-Karts” (and his iguana, Baby) remain in high spirits. “Hey, it’s a shame that some people have to go, but it’s good to have development.

“We’ll have new restaurants and no doubt McDonald’s is going to have a foot in the door, but it has to happen.” Charlie is also a mechanic for the Wonderwheel, Coney Island’s famed Ferriswheel, so he is “not completely out of luck.”

But others, like “Joey Clams,” manager of a bought out gyro stand, expressed great dismay when he heard the news. He asked the Daily News: “Are they going to take us out and replace us with an Applebee’s or Olive Garden? Knishes, hot dogs, shish kebab – that’s what makes Coney Island.”

Rumor has it that Thor has an indoor waterpark up its sleeve. The Astella Development Corporation, a Coney Island nonprofit, released a “Vision Plan” for the amusement area in mid-2003 that also promotes a water park.

After quietly buying up property and ousting businesses, Thor remains tight-lipped about the future of Coney Island. Thor President and CEO Joseph J. Sitt has yet to reveal the company’s plan, only saying that it would “help restore Coney Island to its position as America’s favorite family destination.”

Representative Lee Silberstein adds “We’ll be happy to share the plans once they are further along.”

Charles Denson, author of Coney Island Lost and Found, told The Indypendent that he feels the development is inevitable. “Coney Island has always been in transition, it’s been written off so many times… I know they’re taking Coney into account because they have the greatest brand name. To not take advantage of it is a mistake, but to keep a historical component is important. I’m not talking about nostalgia but creativity. This is where it all started. There is fertile ground here.”

“It’s better not to have vacant lots,” said Denson. “I think that if Thor works with the community that exists now – for example, help bring about this amazing revival with the Mermaid Parade – they’d smooth things over. They came in strong but have been working with a few concessionaires.” Indeed, Lolastar, a creative T-shirt stand on the boardwalk, has been promised space within the Thor footprint after its lease was cancelled.

“Here you have a real mixture, not corporate, not ‘Disneyfied,’” continued Denson. “Some businesses give Coney a bad name, but others, like Coney Island USA who are losing their buildings don’t deserve it. I hope that Thor considers a performance space.”

The CIDC aims to revitalize existing attractions, smooth over transportation and attract private investors. The board said the area’s strengths include beach property and historic attractions, while its weaknesses are rundown facilities and “concentrations of poverty.”

Major changes are already under way, including a $260 million refurbishment of the Stillwell Ave. subway stop completed May 2004 and an ongoing $45 million renovation of the New York Aquarium. Other plans include reopening the Parachute Jump, which has been closed since 1968, and developing the “Parachute Pavilion” around the 262-foot-tall tower.

Opposition has been muted so far, mainly because so little is known about the plans. CIDC Board member Astrudge MaClean, owner of Sign O’ Rama on Neptune Avenue and a resident of Coney Island for 20 years, claims, “These are not just our decisions, they come from the community.”

According to two board sources, public meetings were held in May with a “pretty good turnout” of local residents.

Even Zugin offers support for the CIDC, “They’re not as fixated on the amusement park as I would have it… but what the city is proposing is pretty good. I would rather praise them.”

“But all of this has heated up real estate on Coney Island,” Zigun continues. “Property is changing hands a lot.” Landlords, like Charlie Go-Karts, are selling their land to the highest bidder. Denson told the New York Times: “Landowners who held on to their properties for decades waiting for casino gambling or another white knight are finding Thor’s prices irresistible.”

According to the Brooklyn Papers, Thor has bought up vacant and built-up property from 12th to 21st street, as well as parcels of KeySpan Park.

In a feature on Thor Equities, USA Today wrote “[Thor] focuses on bringing retailers to blighted urban areas of primarily low-income residents.” With such enormous stakes, the low-income residents of Coney Island may be subject to more intense policing and eventually be priced out of the neighborhood (rents average less than $500 a month).

Another real estate proposal involves Astella. According to Astella’s website, it receives funding from 14 separate banks and financial institutions, including Citibank and JP Morgan Chase Bank. Executive director Judith Orlando is a member of the CIDC, so Astella’s vision – including a hotel on top of the aquarium, an Olympic-sized pool and a Business Improvement District – may find an easy hearing from the New York City Council. Under the Vision Plan, furniture stores and flea markets on Surf Avenue are expendable, as is a combined Medicaid facility and government job center that Astella wants “relocated.”

But considering the stakes, serious opposition has yet to materialize. Indeed, with no hard deadlines, the people who would suffer the most from development – low-income residents and small businesses – have few concrete plans to protest. Said Zigun, “People would petition… but there’s nothing to petition yet.”

A.K. Gupta contributed to this report.