In the beginning, the Juliana Coal Company was friendly enough. First they sent a lawyer out to visit Doyle Coakley on his 278-acre farm in rural Webster County, West Virginia. The coal company’s representative promised money, and lots of it, in exchange for the right to excise the coal that lay in seams under the wooded land. “The lawyer came ‘round and told me, ‘I figure we can make you about a millionaire,’” recalls Coakley. 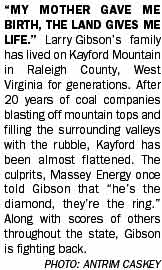 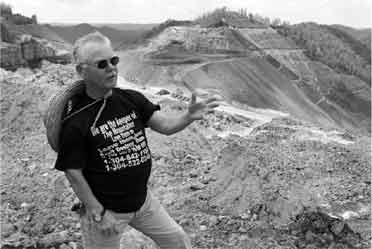 The farmer refused entreaties to either sell his property outright, or lease the mineral rights for a percentage of the coal profits. Like the man who owned the land before him, Coakley wasn’t interested in destroying his farm for a quick buck. “I told [the previous owner] I wouldn’t let them strip it, I gave him my word on it. To turn the land into a garbage dump,” says Coakley, “I wouldn’t have sold it to them for anything.”

Undeterred, the company moved on to the land next to Coakley’s, relying on a stretch of county road running through his farm as the main artery for their trucks to ferry both coal and waste, often times dumping sludge six inches deep in front of Coakley’s home. But instead of shrinking away from a fight, the West Virginia native took them on, presenting his case before the various state agencies charged with enforcing laws regarding the processes of mining, only to find he had few allies, even among those whose duty it was to protect the interests of the average citizen. Even so, the law was enough, for a little while at least, to give him some victories.

It was then that the harassment started. Windows on his rural farm were shot out. Livestock were found on his property, dead from gunshot wounds. There were the phone calls that came in the dead of night, and the thinly veiled threats about a farm burning to the ground. Once, when the window on his truck was shot at on a Friday night, Coakley called the state troopers. They showed up three days later. “It’s the climate of the state,” he says with resignation. “If you’re against the coal company, no one is with you.”

The sorts of strong-arm tactics the residents of mountainous Appalachia have had to endure are chilling, as if someone had taken the plot of a prohibition-era Mafia movie and re-set it in the rural hills of Southeast America. Much like the seams of coal that run dark veins through the mountains of Appalachia, the ties between the coal industry and the state and local governments charged with policing them run hard and deep, and well-hidden from the sunlight.

The days of men boring holes into the earth to extract coal are long over. Modern technology has made it much more cost-efficient for coal companies to simply blast away the tops of mountains to extract the coal underneath, in the process decimating existing forests and the very mountains themselves.

First, the forests – ecosystems of hardwood trees that support not only a wide range of plants, but a number of woodland animals as well – fall before the bulldozers. Mountain peaks that exist as part of a 680-million-year-old range are sheared off with explosives, the resulting rubble dumped into valleys, burying miles of environmentally crucial fresh water streams.

Giant machines known as draglines, some as tall as 20 stories, tear into what’s left of the mountain to expose the coal. In a number of documented cases, the resulting erosion has wreaked havoc on its surroundings. Small towns, nestled at the foot of the mountains, have been buried in silt as a result of landslides. Creeks have turned bright green, infused with poisonous heavy metals leeched from the rocks above. The entire process turns a healthy, self-sustaining ecosystem into what is often described as dead moonscape. Whereas legions of men were once needed to pull coal from the earth, all this devastation can be accomplished with the hands of no more than a dozen men.

Opposition to mountaintop removal mining practices that was once scattershot is coalescing. There are now a slew of groups in various Appalachian states organizing against today’s coal-mining robber barons and the attending political influence and cronyism their wads of cash have purchased.

Jim Hecker, a lawyer with the non-profit Trial Lawyers for Public Justice, has brought around half a dozen civil suits against various coal companies and the public agencies charged with regulating them. The lawsuits are often complex, with lawyers from different groups serving as counsel for the disparate grassroots organizations fighting the coal companies. In one past case, Hecker and other lawyers represented local opposition groups such as Coal River Mountain Watch and the Ohio Valley Environmental Coalition in a lawsuit brought against the U.S. Army Corps of Engineers, which authorizes permits for surface mining operations. “It’s a huge amount of litigation to describe,” says Hecker.

The ties between local and state government agencies and the coal mining companies sometimes leave outsiders unable to distinguish between the two. “Enforcement [of coal mining regulations] is weak, and the regulators are captives of the coal industry,” says Hecker. “[Government agencies] treat the coal mining industry as their constituents, and not their citizens. There’s also a systemic problem in that federal and state agencies have ignored the rules, and when we point this out, they simply change them.”

Some local activists have not been content to wait for decisions to be handed down through the courts while the mountains are falling low. Taking their cue from Southern civil rights movements of the ‘60s, a group of green-minded individuals have declared this season Mountain Justice Summer. In late May the group hosted a five-day camp, which netted about 100 people, aimed at gathering activists together and teaching them about non-violent strategies and skills to oppose the mining. “We have a real solid core of people that are all interested in learning and doing whatever they can to work on this issue,” said Sarah, one of the organizers of the Mountain Justice Summer.

Participants have already held several rallies at permit hearings, and 16 activists were arrested on May 31 while attempting to deliver their demands for the cessation of strip mining to Massey Energy, a company that produced 41 million tons of coal in 2003, according to their own website. Local press have picked up on the issue, providing supportive coverage to activists’ efforts, said Sarah, who credits the resulting attention for the recent outreach by the West Virginia governor’s office to Coal River Mountain Watch. “The facts just aren’t on [the coal companies] side,” she argued. “It just seems ridiculous to me that one of their biggest defenses is that we’re just being emotional. I mean, how can you listen to some of these stories and not be horrified?”