Mary Sandoval immigrated to the United States 10 years ago “to improve [her] life” and find better opportunities. Before she left Guatemala, she had studied business administration and worked as an accountant. For the last eight years she has made dresses and suits for Leigh Max Fashions in the Garment District, and has seen the effects of so-called “free trade” first-hand. Now that Congress is considering ratification of the Central American Free Trade Agreement (CAFTA), she is speaking out. 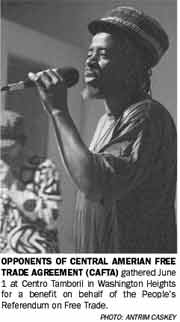 “If CAFTA passes, we will lose more jobs,” she says. “Factories will get richer and workers will be exploited. Here in New York, we won’t have jobs, so we won’t be able to help our families back home.”

CAFTA is similar to the North American Free Trade Agreement (NAFTA) signed 10 years ago by the U.S., Mexico and Canada. CAFTA lowers trade barriers between the seven signatory countries: Guatemala, El Salvador, Honduras, Costa Rica, the Dominican Republic, Nicaragua and the U.S. The agreement was signed in May 2004, and Guatemala, Honduras and El Salvador have since ratified it, but it has languished in the U.S. Congress amid increasingly contentious debate.

Racing to the bottom

When NAFTA was being debated in the early nineties, opponents predicted an ugly “race to the bottom” in which factories would exploit both workers and the environment in order to cut production costs and to keep their contracts with brand-name multinationals like Nike and the Gap. With tariffs and trade quotas eliminated, corporations would be able to move production wherever it was cheapest. Ten years later, it has become clear that this is exactly what has happened.

With so much textile manufacturing already having moved to China and Southeast Asia, Central American factory owners welcome CAFTA in hopes that it will allow them to compete a bit better, due to the comparatively friendlier terms they will have with the U.S. However, critics warn that the trade agreement will simply give owners greater incentive to exploit workers while flooding Central American markets with U.S. agricultural exports.

Sandoval herself fears that the conditions in the textile factory in which her sister-in-law works in Guatemala will get worse. Workers there are already compelled to work 12-hour days with no overtime, she says, because the factory doors are locked at 7 a.m., and not opened until as late as 7 or 9 p.m. Unions are forbidden, and workers receive no benefits.

Congressional Republican leaders would like to get CAFTA ratified by the end of June, but it seems increasingly doubtful that that will happen. Supporters will not introduce a ratification bill until they are sure they have enough votes to pass it. They currently face opposition from Democrats who criticize the lack of labor and environmental protections, as well as from Republicans from states that depend on the sugar and/or textiles industries.

Many of these opponents are historic supporters of trade liberalization, so the switch might seem like a sign of the influence of the growing global movement against such agreements. However, activists are well aware of the likelihood that politicians may be just holding out in order to cut side deals to mitigate the effects of CAFTA upon their constituencies.

Going on the record

Burke Stansbury of the Committee in Solidarity with the People of El Salvador (CISPES) said the group’s strategy now is “to get as many people on the record” as possible with their opposition. Rep. Charles Rangel, whose district includes Washington Heights, condemned the version of CAFTA pushed by the Bush administration in a May 27 statement: “The Administration refuses to include even the most basic standards of common decency and fairness for working people.”

Rep. Jose Serrano of the Bronx issued this statement on his website on May 20: “All of us want to help develop the economies of Latin America, but DR-CAFTA promises to do more damage than good, both for workers and the national economies of the United States and the Latin American nations affected.” Congressman Gregory Meeks of Queens has said that he remains “decidedly undecided.”

Business interests have been sending busloads of people to Washington to lobby in support of CAFTA. The New York Times weighed in on May 31 with an editorial urging ratification. In a recent speech, Gov. George Pataki expressed his fears that CAFTA would not be approved.

Mock mark-up in the Senate Finance Committee is scheduled for mid-June but it remains unclear whether or not the legislation will make it out of the committee with a positive recommendation. Observers believe that CAFTA proponents are about 30 votes shy in the House.

Costa Rica, the Dominican Republic and Nicaragua are unlikely to move toward ratification until it passes in the U.S. Congress. They do not want to risk the protests that have rocked Guatemala, Honduras and El Salvador over ratification.

Many politicians have bemoaned the agreement’s lack of environmental and labor protections, and some have demanded that certain contentious provisions be removed. However, such calls are mostly hot air, since Congress can’t revise the agreement and may only vote “yea” or “nay” on the deal. If CAFTA does come up for a vote, the moment of truth will be when its current critics show whether or not they are willing to stand up to globalization’s powerful proponents and vote against it.

Unfortunately, the American public seems to have slipped back into pre-Watergate credulity, imagining that their government would never lie to them. May Mark Felt and his crimes be long remembered.