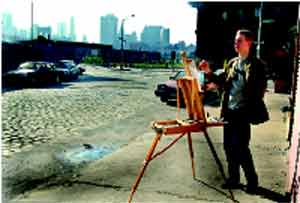 thu JUNE 30
12:00 Noon • FREE
COME JOIN IMMIGRANT YOUTH TO
RALLY IN SUPPORT OF THE DREAM ACT
This event is in honor of immigrant students who are now at risk of being deported. The DREAM Act in the Senate and the Student Adjustment Act in the House are bills that would remove barriers to education and provide a path toward legal residency for U.S.-raised immigrant students who lack legal immigration status.
Thomas Paine Park @ Worth and Lafayette
(near Broadway and Lafayette stop)

Fri July 1
12 noon • FREE
Help us launch the campaign to take back our rent laws. We demand the repeal of the notorious Urstadt Law, which prevents the New York City Council and Mayor from enacting stronger tenant protections and reversing the phaseout of rent stabilization and rent control.
Battery Park, Battery Pl, (at Broadway)
Sponsored by:
Tenants & Neighbors, Met Council on Housing
Coalition for the Homeless

sat July 2
9am – 4pm • FREE
13TH ANNUAL CYCLE MESSENGER WORLD CHAMPIONSHIPS: MAIN RACE
Events will be going on from June 24th to July 4th, but this is the main event! Since 1993 in Berlin, the bike messengers of the world gather every year for a weekend of splendid mayhem. a world-class sporting event!
Jersey City, New Jersey
www.nybma.com/cmwc2005

6am • FREE
Air America’s Morning Sedition
at Vox Pop
Broadcasting their show LIVE from our
café on the morning of July 8! Doors open 5:45am, start time is 6am. Free giveaways! shows.airamericaradio.com/ms/

Tue july 12
7:30pm • $15
A Dog’s Life: A Dogamentary
A hilarious documentary about the benefits of the intense bond between dogs and humans, as told by filmmaker and dog owner Gayle Kirschenbaum and her dog Chelsea. Chelsea, rigged with a “doggy cam,” hits the streets of New York with Kirschenbaum in search of love. 2004. 51 min.
35 West 67th St.

1pm Party, Film Screening at sunset
SUBMERGE ART AND ENVIRONMENT FESTIVAL
The Urban Divers present an outdoor film screening of several films about the Gowanus Canal. Join us for a party at the shoreline that will include oyster demonstrations, guided canoe tours and we’ll be distributing copies of our full-color waterfront resource maps and other literature about the NY / NJ Estuary.
Second and Bond and Canal Sts. F Train Carroll St. stop, www.urbandivers.org

Thursdays
8pm • FREE
Movie Night at Times UP! There will be a short film screened before the feature.
TIME’S UP! Space, 49 E. Houston St. (between Mott and Mulberry)

Friday Evenings
in July
8 – 11pm • $15 adults / $8 youth / ($10 and $5 advance). Doors open at 7:30 PM
Sunset Music Series
Blues, Swing, Rock, Jazz and Country are all a part of the live music scene at Red Hook’s Waterfront Museum Showboat Barge in Brooklyn.
Tickets for the entire evening at the door or at www.waterfrontmuseum.org
Waterfront Museum at 290 Conover St., Brooklyn