Burning the flag is downright un-American. It’s alienated and aggressive, a rejection of all the great things this country is supposed to represent. Flag-burning is a big fuck-you to our whole national mythology – and that’s exactly the point. Anger is legitimate, and not just for this country’s original sins of slavery and genocide. Not just for the firestorms of Hiroshima, Vietnam and Fallujah.

I burned my first flag in 1990 on the steps of the Art Institute of Chicago, a college and museum that had once been the Bauhaus, an innovative European design center that fled Nazi terror in the 1930s to re-establish itself in the heart of America. It was an ironic stage, to say the least. 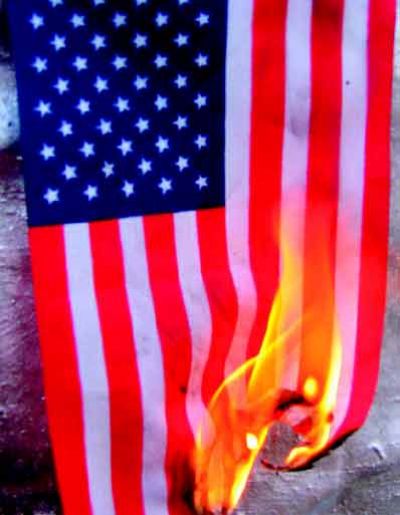 Growing up in Ronald Reagan’s America, life was grim. My hometown, Chicago, was deindustrializing. The steel mills and factories that were the city’s backbone were closed and rusting, and nothing seemed to be replacing them but crack houses, prisons and yuppie boutiques. We were at war then, too, with a battle between fake democracy and fake socialism enough to kill any hope that a better world was possible, especially with all those nukes getting waved around.

The flag was a symbol – not of freedom – which was as hard to find then as it is now, but of an exceptionally American indifference towards what was actually going on. Wherever I saw the ugliest side of this country, there was that flag with a “love it or leave it” not far behind. I wasn’t leaving the land of my birth, but I couldn’t just take it either. In looking to the future, I decided to burn the past.

Dread Scott Tyler, a student artist and fellow communist, had caused a major ruckus when his graduation piece consisted of an American flag draped across the floor in front of a photo montage entitled “What Is the Proper Way to Display the American Flag?” There was a comment book for responses, but in order to comfortably write in it, you had to step on the flag. It was great, and pissed off the right people. Dread Scott was totally unapologetic, even when his family had to hide after a hail of death threats.

Whipped up by local right-wing politicos, thousands of rabid Korean War-era veterans staged daily rallies in front of the school demanding censorship. They burned effigies of Dread Scott hanging from a noose. The artist was black; the vets were entirely middle-aged white men. They called other students “art faggots.” A few fistfights broke out and the police weren’t arresting the thugs. People were afraid.

The ugliness of the scene confirmed everything I had thought. These patriots were the proud soldiers of empire, the gook-killers, the lynchers, the book-burners and flag-wavers. In the name of freedom, they were imposing mandatory patriotism.

I couldn’t just stand by and watch. This wasn’t about symbols anymore, or the form of “free speech.” It was about power.

After making a few calls to the local media, I grabbed some friends and headed out to the suburbs for some midnight flag-raiding. We got a half dozen in no time flat before speeding back to the city.

By the time we arrived at the Art Institute the next day, there were at least 150 cameramen and reporters and a handful of “patriots.” The cops established a cordon for us to get our burn on. And burn we did.

I gave a statement that this wasn’t just a rejection of America, it was an embrace of the world. I was earnest, for all the good that did once the media got their pictures. Not one mainstream publication told our story. They had their own script at the ready: The American flag is a sacred icon that is being desecrated by traitors.

The traditional two-party debate broke out, with conservatives howling for blood and liberals at best mumbling defensively about free speech.

For our part, we had the power to provoke, but could not effectively engage the political firestorm we sparked.

Whenever I hear people who want to wash the flag instead of burning it, I think of how deep blood stains.

Fifteen years after I burned the flag in Chicago, Congress is yet again debating whether to amend the Constitution to ban flag-burning – the first time the Constitution would prohibit political speech.

If they want to see more flags burn, that’s the best way to do it.