All quiet on the southern front this morning. There is not a cloud in the sky over my small village of Deir Kifa in southern Lebanon. You could hear fireworks and far off celebrations well into the night. Yesterday was the south’s turn at the staggered parliamentary elections taking place here in the wake of the Syrian withdrawal. In an unprecedented show of solidarity, the south’s Shia – 70% of the population here – came out in force to defy U.S. (and, to many, also Israeli) demands to disarm the Hizbullah-led resistance that liberated them from more than two decades of Israeli military occupation.

Everyone knew who would win well in advance – no one doubted that the alliance of the two major Shia parties, Amal and Hizbullah, would clean up. The real test would be in the scale of the turnout. The Beirut elections last week, although a big victory for the pro-U.S. Harriri list, were marred by an embarrassingly low turnout. Going into the south’s elections, 6 out of 23 seats were uncontested, a whole slew of opposing candidates pulled out suddenly and a significant number of Christians were planning to boycott – all signs boding a low turnout.

Hizbullah countered this by turning the elections into a referendum on protecting the resistance, and the Shia – particularly those living in small villages like mine – did not disappoint (in one village turnout reached 93%). Voting in Deir Kifa took place in the elementary school just below our house. Early in the morning I could already hear the bustle. By the time we got there at midday, the mood among the campaigners was almost festive. At the school gate, people spoke of the need for unity at this critical time and the dangers that face the Shia if the U.S. tries to disarm the resistance.

The electoral alliance between bitter rivals Hizbullah and Amal reflected these concerns and voters rewarded them for it. While the two Shia parties have been forced by Syria to run on a single slate before, this was the first time that the parties themselves made the decision to form a united front. The poisonous atmosphere of past elections, many told us, had lifted as a result.

The one point of contention revolved around the candidacy of Communist Party member Anwar Yassin who spent 17 years in Israeli jails for participating in the resistance. Many in the village made sure to vote for him out of respect for his sacrifice. He criticized the Hizbullah and Amal list for exploiting the resistance issue to marginalize their independent and leftist opponents.

We met some Communists from our village passing out red posters of Yassin clad in Che Guevara paraphernalia. They complained that the resistance should not be monopolized by one party (Hizbullah) or one sect (the Shia), that well before Hizbullah emerged it was communists and nationalists, Christian as well as Muslim, who initiated the armed struggle against Israel. But even the popular and respected Yassin barely registered in the final tally. The Hizbullah-Amal list won by a huge margin and turnout registered at a very respectable 45% (in Lebanon, where a huge chunk of the population has emigrated or works abroad and cannot vote, this is considered a high turnout rate). 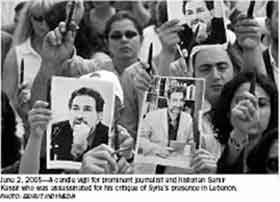 The Lebanese elections are not over yet with two more rounds in Mount Lebanon and the north still pending, but Hizbullah has undoubtedly succeeded in using the elections to fortify its already strong standing in Lebanon. Most commentators predict that by the end of the elections, the Shia party will have increased its parliamentary bloc from 12 to 14 members. This bloc will have many allies in parliament as well as the already stated support of the Lebanese government, which has rejected the U.S. position that Hizbullah is either a terrorist group or even a militia that must be disarmed.

It is fitting that the south’s overwhelming affirmation of the resistance landed on June 5, the very day that Israeli forces invaded Lebanon back in 1982. The people of the south are reminded daily – as if they need such reminders – of the dangers that Israel poses with breaches of U.S.-supplied Israeli fighter jets into Lebanese airspace. Two days after the elections in the south, as I complete this report, four Israeli jets roared low over our village as if to send a message of disapproval and defiance. The villagers below have said their piece and will no doubt stand by their word – no amount of Israeli and U.S. bullying will change their minds after Sunday’s elections.