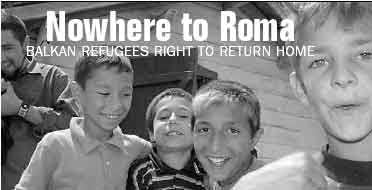 Zitkovac, Kosovo – Along the way to one of three makeshift refugee camps inhabited by the Roma remnants of a former Yugoslav mining complex go on for more than two miles, the many slag heaps indicating a past of heavy lead smelting.

As the United Nations Mission in Kosovo (UNMIK) vehicle approaches the Zitkovac camp, Roma children run up to greet yet another set of visitors. Outside traffic to the camps has picked up in recent months, after reports by groups like Refugees International and the Kosovo Ombudsperson accused UNMIK and the United Nations High Commission for Refugees (UNHCR) of knowingly setting up the camps on land other U.N. agencies admit is heavily contaminated from the former mine activity.

At Zitkovac in particular, the World Health Organization reported in 2004 that the lead levels in the blood of the Roma children surpassed anything their instruments could read.

June 12 marked the six-year anniversary of the end of a U.S.-led NATO bombing campaign in Kosovo. The 78-day campaign ended the Serbian crackdown on Kosovo’s independence-minded Albanian majority. Now, the Bush administration, through U.S. Undersecretary Nicholas Burns, and UNMIK’s second-in-command Larry Rossin, is pushing the United Nations and the Albanian-led government to return Kosovo’s refugee minority community, or internally displaced persons (IDPs). The Roma refugees were driven out in reprisal attacks by ethnic Albanians in 1999 and again in ethnically motivated rioting in 2004.

The successful return of displaced persons is a major condition placed on the majority Albanian government in order for status talks with the U.N. Mission, which serves as an interim government, to begin on autonomy. More often than not, “progress” refers to the return of approximately 100,000 displaced Serbians. But included in this group are more than 600 Roma living in the three camps established in 1999 – Zitkovac, Kablare and Chesminluk.

In May of this year, Burns spoke in front of the U.S. House International Relations Committee about the U.S. position with regards to the resolution of Kosovo’s final status and the eight democratic benchmarks, or “standards,” that Kosovo’s Albanian leaders must fulfill to propel status discussions to the next phase.

“We seek to hasten the day when peace (in Kosovo) is self-sustaining and our troops can come home,” he said. The United States has a 99-year lease on a large military base in Kosovo, with U.S. soldiers comprising about 10 percent of the 18,000-plus NATO peacekeeping force. Burns insisted that Kosovo’s final status must be based on the formation of a multi-ethnic society with full respect for human rights. This, according to Burns, included the right of all refugees and displaced persons to return to their homes safely.

But, as one local analyst put it, refugee returns do not apply to the Roma. Indeed, there is little evidence of a commitment to returning the Roma of Zitkovac to their homes.

In Zitkovac, containers that were supposed to serve as temporary shelters have melded into a shantytown, taking on a feeling of permanence, though UNHCR, which built the camp, admits it was not meant to exist for more than 90 days.

The 200 Roma living in Zitkovac represent a portion of the more than 8,000 Roma burned out of their “Mahalla,” or community, in the nearby city of Mitrovica, as Serb security forces pulled out in June 1999. Local residents say that the 150-year-old settlement on the banks of the Ibar River – which separates the Serb-dominated northern part of Mitrovica and the southern, Albanian-dominated part – was burned by Albanians who viewed the Roma as “Serb collaborators.”

Speaking on condition of anonymity, one former U.N. official, who worked with non-governmental organizations and the city of Mitrovica to find a solution, said that without recent media attention, the Roma refugees in Zitkovac would simply be a casualty of the return process.

Habibi Hajnini agrees. He is the elected leader of the Roma group living in Zitkovac. After six years of living amid open sewage and rigged-up electrical lines, Hajnini says there has been little contact with international or Albanian officials about returning to the Mahalla.

“We heard there was an agreement with the municipal president of Mitrovica, Fajk Spahia, and the international community regarding the plan for a return to the Roma Mahalla,” Hajnini said.

The plan Hajnini refers to is one worked out by U.N. Mission’s Office of Returns and Communities, UNHCR, various NGOs and the Albanian-led municipality, which would rebuild a section of the devastated remains of the Mahalla.

But as Hajnini puts it, “We were not present when they signed this agreement, and we actually didn’t know about it until afterwards, and we still don’t know what this plan is all about.”

The European Roma Rights Centre in Budapest, Hungary, has initiated a lawsuit against the U.N. Mission for its complicity in the poisoning of the Roma in Zitkovac. As early as November 2000, the Mission released a report recommending the immediate relocation of the three Roma camps. It also called for a continuous education program and financial support for the eradication of lead poisoning.

When asked why the U.N. Mission failed to act on its own recommendations to move the camps in 2000, spokesperson Neeraj Singh said, “Despite all of our appeals to the Roma to actually move out of there, they have very unequivocally stated that they would only return to the Roma Mahalla.”

A legal watchdog in the province, Marek Antoni Nowicki, said that the Roma were aware of the health risks to their families, but he said, “In their understanding, in order to have a chance to go back to their point of origin – in this case, the Mahalla, which is their international right as refugees – and in order to keep this Mahalla question on a proper level politically, they feel they have to make a stand.”

A first-ever conference to raise money to rebuild the Mahalla was organized for the first time in April. Again, representatives of the Mahalla were not invited to attend. Complicating matters, the German government has made arrangements with the U.N. and local Kosovo authorities to forcibly return over 10,000 Roma who sought asylum there after the Kosovo conflict in 1999.

The problem, according to U.N. sources, is that there are few municipalities which will accept the Roma population.

In his visit to Kosovo in June, Undersecretary of State Burns said that status discussions should take place later this year if the Kosovo leadership continues its progress toward building a multi-ethnic Kosovo. “It is very important that the Kosovo Albanian majority stand up clearly and say that people who left Kosovo for whatever reasons have the right to come back here,” he said, adding, “that sense of tolerance has to be at the heart of any political settlement in Kosovo.”

Meanwhile, children in the Zitkovac continue to get sick. According to the former U.N. official, the best thing for the 150-year-old Roma community is to leave Kosovo altogether. “The problem is no country is willing to accept this group of people.”