Chilean singer Victor Jara was South America’s leading left-wing troubadour of the 1960s and early ‘70s, a rough equivalent of Bob Dylan or Pete Seeger. Many North Americans know his name—after President Salvador Allende, he was the best-known victim of the U.S.-backed military coup that deposed the socialist Allende in 1973—but few have actually heard his records. 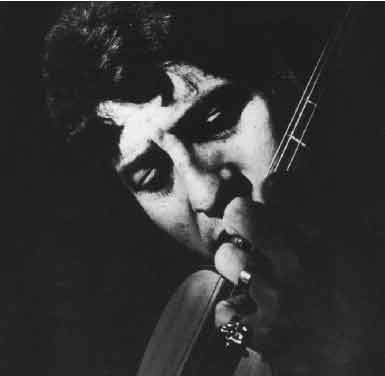 Which is a shame, because much of his music was great. Wanting to create music that came out of Chilean folk traditions without being an ossified, academic imitation of the past, Jara blended the boleros and flamencos of the Spanish-guitar vocabulary with the sounds of Andean mountain music—the airy quena flute, the rippling, gently frenetic strumming of the charango armadillo-shell mandolin, and the discreet thump of the bombo drum. His songs, from lullabies to protests, playful to mournful, have an intimate, late-night feel – but he always played with rhythm.

Born in 1934 in a rural village, Jara grew up in a Santiago slum. By the early ’60s, he’d become a promising theatre director, but he preferred playing music. He hooked up with the nascent “nueva cancion” (new song) political-songwriters movement, centered around the Peña de los Parra coffeehouse, along with the groups Quilipayun and Inti-Illimani.

1969’s Pongo en Tus Manos Abiertas (“In Your Open Hands”) album showed how his vision had crystallized. “Puerto Montt, oh Puerto Montt,” he cried out, lamenting a massacre of peasant squatters earlier that year. Another song, “Movil Oil Special”—its title a pun on the “Grupo Movil” riot squad—spoke of the students and young revolutionaries saying “Enough” to the “mummies and dinosaurs” of the right wing, with riot sound effects interrupting it in the middle. Released on a label run by the Communist Party’s youth group, the album sold well enough to feed the label’s future. Later Jara records would make the Chilean Top Ten.

Salvador Allende’s election in 1970 was a moment of hope for Chile’s poor and working-class people. The new government repossessed the riot squad’s water cannons and used them to supply agua to the shantytowns. Jara schlepped his nylon-string acoustic all over the country, playing festivals, benefits, and Allende campaign events. In 1971, he recorded an album called El Derecho de Vivir en Paz (“The Right to Live in Peace”).

That was not to be. The existence of an elected leftist government in Latin America severely vexed the Nixon administration, even before Allende nationalized the Chilean copper mines, most of which were owned by U.S. companies. The CIA funded anti-Allende propaganda and a truck owners’ strike that disrupted Chile’s economy. It also backed fascist elements in the military, who assassinated or jailed the generals who opposed a coup.

One of Jara’s last recordings was a funereal love song, “Cuando Voy al Trabajo.” Written in 1972 after a friend marching in a demonstration was killed by a sniper, it depicts a man on his way to work, missing his wife, and “working at the beginning of a story, without knowing the end.”

Victor Jara was murdered by the Chilean military on Sept. 16, 1973, five days after the coup that installed General Augusto Pinochet as dictator. There are varying versions of his demise, but the main story seems to be that he was one of several thousand political prisoners held in the Santiago soccer stadium. A commanding officer recognized him, shattered his wristbones with a club, marched him out to the center of the stadium, and told him, “Now play your guitar, cabrón.” Jara began singing “Venceremos,” the anthem of Allende’s Popular Unity party, a cappella, and hundreds of the prisoners joined in. The soldiers opened fire with the machine guns they called “Hitler’s saws.”

Remember that story whenever you hear the names of Pinochet or Henry Kissinger.

Most of Victor Jara’s master tapes were destroyed after the coup, but his CDs are available. I’ve seen them at J&R Music World, and a comprehensive online source is delcanton.com.