There is no gay pride in Bed-Stuy. As I walked to the Franklin subway station to go to the West Village, I saw no rainbow flags, no stickers, no posters and no gays or lesbians holding hands. There is Christian pride, West Indian pride and Black pride. You can stand on a corner and curse the white man or the devil but you can’t be openly gay without risking your life.

On Sunday, June 26 two great gatherings occurred in New York: one was Gay Pride Day in the Village, the other a Christian Crusade led by Billy Graham. Both events promise liberation, the former from shame and the latter from sin. But both are designed to foil the hopes of those who go.

Gay Pride Day is the only day the Village is truly integrated. Black and Latino gays and lesbians flee to it to escape the violence of their neighbors. They go to pretend that it is safe to be gay. It’s not. It is safe in the Village and Chelsea where the white gay elite has used privilege to create a false utopia. It is false because the majority of gays and lesbians of color still live in daily terror of being outed and beaten.

Many people of color believe homosexuality is a “white thing” but it’s less a belief than our inheritance. When Africans were enslaved they were chained with metal and ideas, in particular the idea of race itself.

Racism grew up hand-in-hand with slavery and its icon was the Great Chain of Being. Europeans are at the top and as the chain descends the species becomes darker and dumber. Blacks are the bottom link. We are seen as talking monkeys, a step above the animal world and our closeness to nature means that like animals we do not love but lust. 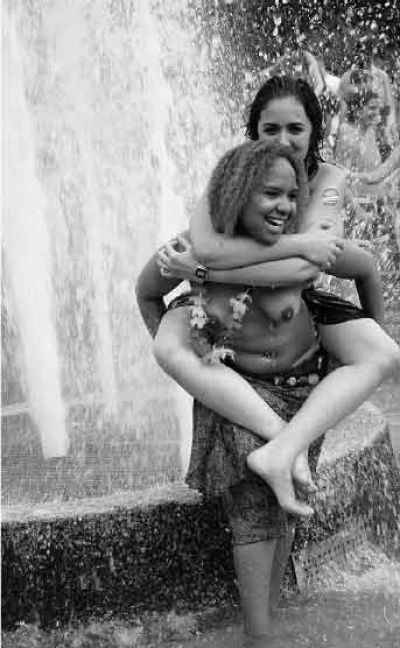 Since we are assumed to be closer to nature our sex is assumed to be as unstoppable and inexhaustible as nature itself. One sees it in the Harlem Renaissance as Josephine Baker danced against a jungle backdrop in a banana belt. One sees it in Spike Lee’s recent film She Hate Me. One sees it in our homophobia, where Minister Louis Farrakhan keeps gays out of the Million Man March and out of heaven.

Many people of color blindly hate homosexuality because it’s condemned in the Bible, and blacks needed the Bible to condemn slavery. We accepted Christianity to achieve parity to whites, to shame them about the social inequality that contrasted with our spiritual equality. It’s a tactic that cost us solidarity with our gay brothers and sisters.

I went to Billy Graham’s Crusade in Queens. His message was comforting and dangerous. “There’s going to come an end to… the world system in which we live, which the Bible calls ‘of Satan,’” Graham said. He offered safety and salvation not only from the destruction of the world but the destruction of our souls by our sinful nature. We fear God because we are taught to fear ourselves. Yet in a secular reading, if religion created God, did it not also create sin? Doesn’t one need the other?

Religion defines desire as sin and creates a community from fear and shame. Secular thought frees us from shame but not responsibility. It tells us to not deny desire, to accept the divisions between what we want, what we can have and who we are. It tells us to manage that split with as much grace and compassion for others as possible.

As night came party-goers filled the bars and clubs, to drink and grind hips in solidarity. It was obvious that in performing desire one can be trapped within it. Conservatives accuse gay pride marches of immoral hedonism. In a way they are right. Pleasure is immoral when used as a substitute for political struggle. Until gays march to integrate Bed-Stuy or the Bronx or where ever they are killed for daring to love each other, Gay Pride will be a beautiful celebration of an empty freedom to people like Sakia Gunn, a 15-year-old black girl killed in Newark, New Jersey two years ago when she told a man who was trying to pick her up that she was a lesbian.

Later that night, I rode the A line home and saw two black lesbians on the train holding hands, tickling each other’s ears with whispers. A black man looked over and shook his head, turned again and his look became locked into a hate stare. I saw in that long winding distance between him and them the final route of the Gay Pride March.