Before Seattle encouraged us to “be the media,” and before Malcolm X’s declaration of “the Ballot or the Bullet,” there was Robert Williams. Little known in our time, Williams personified the spirit of the 1960s through his advocacy of Black armed self-defense and a DIY media strategy that made him an internationally renowned revolutionary. The release of the CD Self-Defense, Self-Respect and Self-Determination gives insight into one of the great formative leaders of Black Power politics. 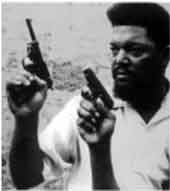 Born in Monroe, North Carolina, Williams took to organizing at a young age. By 16, he’d led a militant strike of local machinists. After serving in the Marines during the Korean War, he returned home comfortable with a rifle and determined to defeat Jim Crow segregation. As president of the local branch of the NAACP, Williams led “wade-ins” to integrate public swimming pools while organizing armed self-defense units against the endemic Klan violence that Southern police tolerated while it came down hard on labor and civil-rights activists.

Hounded by the FBI on bogus criminal charges, Williams was received in post-revolutionary Cuba as a political exile along with his wife Mabel. Imbued with dreams of bringing the third-world revolution into the heart of America, Williams launched Radio Free Dixie, a counter-propaganda radio program broadcast from Havana into the American south. Radio Free Dixie was incendiary. Here was an unafraid Black man invoking revolutionary violence against white supremacy on the airwaves of Mississippi. Williams and family spent years in exile, with notable stops in Tanzania, Vietnam and China, where he was received as a guest of state. All the while, he published The Crusader, a newsletter with a formative influence on the Black Panther Party and the Revolutionary Action Movement.

The CD features rare clips from the Havana broadcasts and in-depth interviews with Mabel, who continues to carry her husband’s legacy. It’s amazing to consider Williams’ global reach in the years before the internet. While the digital divide is often blamed for lack of access to alternative media, Williams proved that movements, not machines, are the best conduit for radical ideas.