I was shocked at first. But it’s a great place to do what you want and to pursue your dreams,” says Lipner, 14, an aspiring writer who is currently working on a fictional short story about super-powerful energy drinks and an email chain letter.

“Since she’s been in this school, she’s been totally motivated to go,” says her father, Richard Lipner. “She seems more like herself.”

Located in the basement of the Free Methodist Church on the southern edge of Park Slope, the Free School is a rambunctious, easygoing refuge for kids fleeing the more structured system of learning that is the norm at most schools. There is no curriculum, no classes and no grades for the school’s 29 students who range from 5-15 years old. If the kids aren’t interested in what a teacher is offering, they can walk away and do something else, like play a musical instrument, start a game of charades, sample different varieties of cheese, work on a zine, walk a dog or surf the Internet. 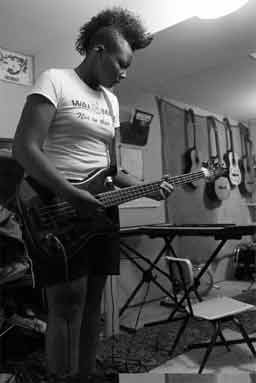 “The primary focus of the school is to support the kid’s social and emotional growth so that they are able to get in touch with their own interests and inner motivation,” says Alan Berger, the Free School’s founder and director.

For Berger, there is no sense of urgency about cramming information into his students’ heads. Playing charades is seen as being just as valid as memorizing multiplication tables or the names of all the state capitals.

“It takes kids different amounts of time to deprogram and detox from the regular school system,” Berger says. “The kids have to take responsibility for their own education. It’s about you and what you want to learn.”

The original free school was started in Summerhill, England in 1921. There are dozens of free schools in the United States currently, including those in Sudsbury Valley, Massachusetts and Albany, New York, that have flourished since the 1960s. The core of the school is a regular meeting where students, teachers and staff sit down as equals to set the school’s course.

Berger, who worked for seven years as an assistant principal at Murray Bergstraum High School, was frustrated by the public school system’s unwillingness to embrace project-based learning in place of traditional rote memorization. In October 2003, he began organizing the Free School with a notice that went out in the Park Slope Food Co-op’s newsletter, and the school opened last September with 34 students and three teachers, two interns and a number of parent volunteers. Tuition is $9,000 per year with a sliding scale for less financially advantaged families. People of color make up about half the student body, which hails from Brooklyn, Queens and Manhattan.

“I knew this was the best shot for my son,” said Corrine Goodman. Her son Sylvan, 14, who was unable to function in a normal school setting, has gone from being unwilling to write to an aspiring writer working on two novels.

“This is the first time he is interacting with a community on a regular basis,” Goodman said. “It’s been invaluable for him.”

The process of launching the school has been a learning experience for everyone involved. Expectations that all children would flourish harmoniously in a completely free environment have been tempered by experience. In November, the school placed a cap on the number of boys after the girls expressed concerns that their needs weren’t being met. The school also now has a Consequences Committee composed of a fluctuating group of about five children plus one adult that reviews complaints filed by students, staff and teachers.

“Instead of being punitive, we try to find a logical consequence to their actions,” says Barbara Danish-Brown, a volunteer who works with the Consequences Committee.
“The children have been very thoughtful about what makes sense when someone breaks a school rule,” Goodman adds. “I don’t know whether that would have been the case in September or October.”

Berger himself recently landed in front of the Consequences Committee after he chided a student for allowing her cell phone to ring during a meeting only to have his own go off several minutes later. His consequence: he was allowed to check his messages but otherwise couldn’t use his cell phone inside the school for the rest of the day.
“I learned my lesson,” he says.

However, the Free School’s wide-open democracy has inspired some criticism from within. A couple of the older boys, Rafael and Aaron, have both urged their fellow students to elect a school president.

“We needed a school president so kids would have one person to go to with problems instead of having so many meetings,” says Rafael, who would like to be president.
So far, this proposal has been voted down.

“People wanted to continue to have meetings and to have their say,” Danish-Brown says.