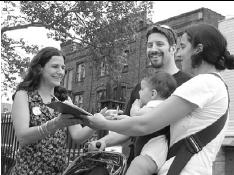 Since assuming the office of Brooklyn Borough President in 2002, Marty Markowitz has dedicated himself to a bareknuckled boosterism designed to evoke nostalgia for a Brooklyn that no longer exists. The former state senator has a knack for knowing where and when to mug for the cameras of the borough’s weeklies and plays the role of the “fuhgedaboudit” Kings County native to the hilt.

But Markowitz has also steadfastly supported Bruce Ratner’s Atlantic Yards development plan, which includes a new arena for the Nets and highrises up to 50 stories. In doing so, the borough president has prompted the wrath of many who feel the plan is grossly out of scale with the neighborhood.

“He’s been outrageous in his shameless courting of Bruce Ratner. What I’ve really learned traveling around Brooklyn is that there are several communities angry about his complacency about land use,” says Gloria Mattera, a Park Slope resident who serves as co-chair of the Green Party for New York State and is mounting the only serious campaign against Markowitz.

Many feel the position lacks real authority.  The borough president’s views are regarded only as suggestions to the New York City Council. (Markowitz’s stand against the rezoning plan for Greenpoint and Williamsburg was ignored by the council in its recent vote to approve it.)

But Mattera argues that the position holds plenty of sway over land-use issues in naming appointees to the borough’s community boards and one member to the City Planning Council.  “It’s important for people to know that the borough president has a lot of influence on landuse issues and planning boards,” she says.

Mattera must first collect 4,000 signatures in a five-week span to get her name on the ballot.  Then there is the substantial war chest  Markowitz has accrued. According to documents filed with the New York City Campaign Finance Board, the incumbent has raised over $1.5 million, while Mattera is a few hundred short of $9,000. In the short term, she says her goal is simply to try to raise $50,000 in order to become eligible for matching funds.

The range of issues Mattera’s campaign cuts across may aid her efforts. She is a proponent of educating parents about opt-out rights for high schoolers targeted by military recruiters and is campaigning for a greener Brooklyn. She also addresses health issues specific to the borough, such as high asthma rates. “We have a lot of grassroots support in different areas of the borough,” says Mattera.  “I hope that people are ready to vote for someone with a different vision.”