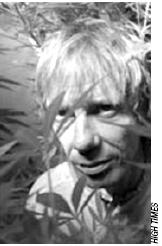 San Diego medical-marijuana activist Steve McWilliams, 51, killed himself July 12. McWilliams, who ran the Shelter from the Storm medical-pot collective, was facing a six month federal prison sentence for growing 25 ganja plants after being arrested in 2002. Friends and fellow activists said that he was depressed over the Supreme Court’s June medical-marijuana decision, which effectively nixed his appeal, and in severe pain from nausea, migraine headaches, and old motorcycle-accident injuries. The terms of his bail had barred him from using medical cannabis. “Steve was a courageous fighter for the cause and he will be sorely missed,” said Dale Gieringer of California NORML. Medical-marijuana activists held vigils in his memory July 19 in San Diego and other cities.