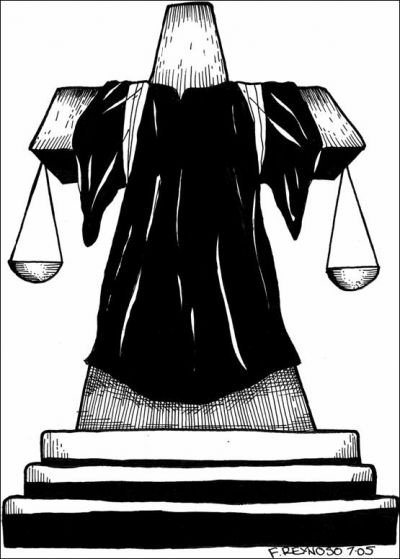 For the last 15 years, Democrats have argued that people should vote for them because a Republican president would put disastrous judges on the Supreme Court. With President Bush’s nomination of John G. Roberts to replace retiring Justice Sandra Day O’Connor, the moment of truth for both the high court and the Democratic Party has arrived.

Roberts, 50, who has been a judge on the federal DC Circuit Court of Appeals since 2003, is an experienced litigator with a long history of right-wing positions on issues from abortion to labor, media ownership to mining. In 2003, the liberal Alliance for Justice said he had a “record of hostility to the rights of women and minorities.”

In a televised address July 19, Bush praised Roberts as “one of the finest legal minds in the country” who has “devoted his entire professional life to the cause of justice.”

The battle over confirming Roberts could be the biggest since the appointment of Clarence Thomas in 1991 – or it could be a fizzle like the recent filibuster imbroglio in the Senate, in which the Democrats acceded to the nomination of three judges from the depths of the judicial right wing.

At stake are attempts by the far right, despite its denunciations of “judicial activism,” to push forward a radical revamping of American jurisprudence.  They want to pack the benches with judges who combine a Talibanoid Christian social agenda with a relentless sanctification of property rights. In this philosophy, environmental regulations are deemed unconstitutional “takings” of property rights, but laws against oral sex are not an unconstitutional intrusion on privacy rights. Judge Janice Rogers Brown, confirmed to the D.C.  Circuit Court of Appeals in the filibuster compromise, has said that rent control is as odious as slavery, and complained that a “socialist revolution” took over the federal courts in 1937. Before that “revolution,” the Supreme Court routinely struck down laws protecting workers, including bans on child labor.

TORTURE IS “MODERATE”?
Another crucial area is civil liberties, especially with the Bush administration’s invention of “enemy combatants” as a category of detainees who are neither prisoners of war nor common criminals – and thus have no rights. Ironically, Attorney General Alberto Gonzales, who helped craft the Justice Department’s excuses for why torture was legal, was portrayed as a “moderate” when his name was floated as a possible Court nominee. The Christian right objected that he was insufficiently anti-abortion.

That won’t be a problem for John Roberts. As deputy solicitor general under President George Bush Sr., he wrote a brief supporting the “gag rule” banning familyplanning groups receiving federal funds from discussing abortion with clients. “We continue to believe that Roe v. Wade was wrongly decided and should be overruled,” he argued, adding that there is no fundamental right to abortion anywhere in “the text, structure or history of the Constitution.”

In private practice from 1993 to 2003, Roberts litigated several prominent corporate-rights cases. In 2002, he represented Toyota in a case where the Supreme Court ruled that a Kentucky assembly-line worker fired after she got carpal-tunnel syndrome was not covered by the Americans with Disabilities Act. He also represented Fox Television in its successful challenge to federal limits on media ownership, and wrote an amicus brief supporting the West Virginia Coal Association when it got the federal ban on mountaintop-removal mining overturned.

If the Democrats mount any challenge to Roberts’ confirmation, they are likely to denounce him as an “extremist” and “out of the mainstream.” The Republicans will call the Democrats “far-left obstructionists.” The Democrats will probably not stress specific cases or issues, and the corporate media will almost certainly ignore those details to concentrate on the political conflict.

O’CONNOR A GONER
After Justice O’Connor announced her retirement July 1, numerous Democrats urged Bush to appoint a successor as “moderate” and “thoughtful” as she was. Her career, party chair Howard Dean said, “was marked by a commitment to placing the law ahead of partisanship and ideology.” Justice O’Connor may have been moderate compared with Chief Justice William Rehnquist, Clarence Thomas, or Antonin Scalia, but she was on the wrong side in some of the Court’s most screamingly unjust decisions of the last two decades. In 1986’s Bowers v. Hardwick, she voted to uphold a Georgia law that made it illegal for an adult man to give a blowjob in his own bedroom.  (When the Court reversed that decision in 2003, she agreed that the Texas law in question discriminated against gays, but would not hold that all sodomy laws were unconstitutional.) In 1993’s Herrera v. Collins, she concurred that it wouldn’t be unconstitutional to execute a man who claimed to have new evidence proving his innocence, as long as his original trial had been procedurally correct.

In December 2000, she voted to halt Florida’s recount of its presidential vote, on the grounds that continuing it would cause “irreparable harm” to George W. Bush.  (His lead had shrunk to 154 votes.) Three days later, in Bush v. Gore, she voted to prohibit the Florida recount, thus selecting Bush as president. The Court’s rationale was that counting ballots that had not been properly recorded by voting machines would violate voters’ right to equal protection, because different counties would probably use different methods