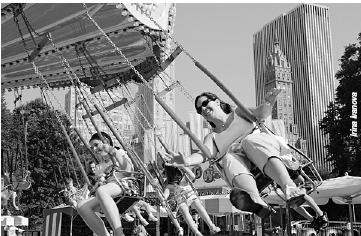 Once upon a time there lived a beautiful and wealthy couple named Victor Ian and Mrs.  Victoria Gardens. They lived a rather lavish life traveling across countries and exploring many new lands. They were, in short, social butterflies in their circle of friends. — The tale describes how this extravagant yet lonely couple could not have children. But fret not! The couple built a rink-sized amusement park, drawing children of all ages, and lived happily ever after!

“I’d venture to say that our prices are not particularly high compared to other amusement parks,” says Dana Santulli, Victorian Gardens’ sales manager. “Our prices are competitive.”

The price is comparable to admission to Six Flags in New Jersey, or a full day at Coney Island, both of which feature many more rides. At the entrance to Victorian Gardens, parents and nannies negotiate with children on how many rides they can go on, or leave the area entirely.

“It’s hard, because what can you do with your children in New York City?” one woman asked, after refusing to pay admission for her disappointed son. “This place is tempting for any child.”

Victorian Gardens sublets its space at the Wollman Ice Skating Rink, a Donald Trump venture. According to a marketing assistant at the Central Park Conservancy, the privatization of Central Park is common. “We have corporate sponsorship, and they are allowed to hold special events in exchange.”

According to Santulli, the operator of the facility, Central Amusements is funded by “anonymous investors,” who presumably are not the fantastical Victor Ian and Victoria Gardens. Nevertheless, it’s making a killing this summer, and enjoying a very different kind of fairy tale.