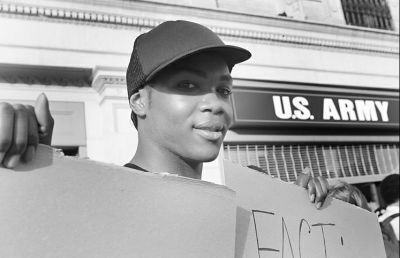 On July 14, several dozen antiwar activists organized by the New York City Counter-Recruitment Campaign picketed the military recruiting offices on Flatbush Avenue in Brooklyn. The coalition’s focus is to inform parents of high-school-age students that they can “opt out” of the provision in the federal No Child Left Behind Act that requires schools to give students’ names, addresses and other information to military recruiters – who have been using increasingly high-pressure tactics to get people to enlist.

“It’s important to take a stand against military recruiters who are preying on poor people, coming to black neighborhoods,” said Brian Lewis, a New School student who is working for the summer with Youth Activist Youth Allies (YaYa), one of more than 15 groups participating in the counter-recruitment campaign. “I’m taking a stand today and saying no.”

“If you want to serve your country, there’s other ways to do that – the Peace Corps, as a civil servant,” Lewis answered.  “You don’t have to put your life on the line.”

Hall, who hasn’t yet been targeted by recruiters, left saying that he was going to talk to his parents about the “optout” clause. About 3,000 leaflets were distributed during the event.

Lawrence Herisnor, 19, of Manhattan, who also works with YaYa, just graduated from the High School of Environmental Studies in Midtown. Military recruiters were at his school “almost every single day,” he said, but “they never approached me. They could see I was gay. They’d come and ask my friends in front of me and never talk to me.”

FRUSTRATED RECRUITERS
As the demonstrators marched on the sidewalk, three recruiters stood in silence in the open door of the recruiting office. Sergeant Shiverts, who has been a recruiter for twoand-a-half years, called military veterans among the protesters “hypocritical.” “They didn’t like it when people protested against them,” he said. “So why are they now protesting against those who are fighting for their freedom?”

The recruiters would not comment on whether their recruiting rates were up or down. Nationally, the army is facing its worst recruiting crisis since it became an all-volunteer force in 1973. Its year-to-date recruiting numbers are off by 14 percent, and at its current pace it will miss its annual goal of 80,000 recruits by more than 11,000. The Army National Guard and Reserves are experiencing similar shortfalls.

Civil libertarian Norman Siegel, a candidate for the Democratic nomination for public advocate, said that normally he would not keep military recruiters out of schools, but expressed concern that military recruiters were coming to schools and lying to students about what they would get if they signed up. If that were the case, he said, “I’d say they couldn’t be in the schools.”

Ike Enwereuzur, an aspiring sports writer who considered enlisting for the first Gulf War in 1991, paused while passing by on his bicycle. He said that he had a couple of friends who joined the military for educational benefits, but “they never got it. [The military] kept delaying it, and they got frustrated. I think it’s a scandal.”

According to the Central Committee for Conscientious Objectors, two-thirds of all recruits never receive college funding from the military. Only 15 percent graduate with a four-year degree.

“I NEEDED A JOB”
One member of the crowd insisted that this reporter destroy a photograph of him taking antiwar leaflets. He said he was a military policeman home on leave from serving the Iraqi city of Basra and could not be seen at a demonstration.

He said he enlisted because, “Well, as you might know, 50 percent of black men don’t have jobs. I needed a job.” Recruiters told him that he “may or may not go to Iraq.”

He said the war and the military are nothing like what the media or the military portray. Blacks and Latinos get undesirable assignments, no one from different races really mixes and supervisors are verbally abusive – “like Full Metal Jacket and shit.”

“Our superiors treat us like shit,” he continued. “We treat Iraqis like shit. Shit rolls downhill, you see? The officers, they live in palaces, you know Saddam’s old palaces. I live in a tent.”

And the Iraqis? “We treat them like they have no rights,” the military policeman said. “If there’s an explosion, we arrest everyone on the street. We’ll arrest the family til a suspect turns himself in. “I hold them til they get to Abu Ghraib, like Rikers, you know,” he explained. “I’ve never seen [abuse of prisoners]. I’ve heard about it. I’ve seen people do sleep deprivation to prisoners. I’m not involved in that.”