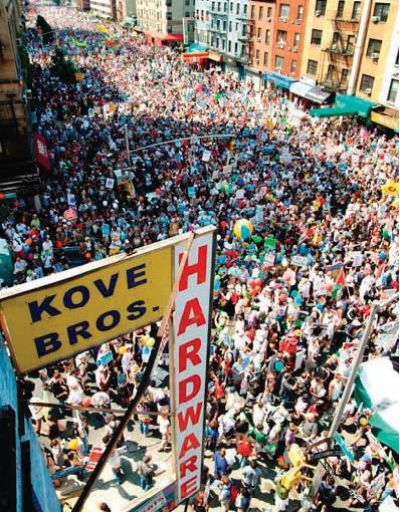 In the age of the Patriot Act, the RNC protests last summer were undoubtedly historic. The display of massive public dissent was a victory for all participants.

Organizers count as successes that the dissent broke through the media bubble and the fact that small guerrilla-style actions harassed Republican delegates allπ week.

In terms of changing power relations, however, the protests fell short.  It was unlikely that protests alone were going to affect the 2004 election. And while many activists and groups developed healthy working relationships during the RNC, no lasting coalitions came out of a year of intense activity.

Other missteps include the failure to organize a larger direct action capable of disrupting the convention; the sidetracking of the anti-war movement into an anti-Bush movement; and the inability to constructively address tensions over race.

In the summer of 2003, the first meetings occurred for what would become the No RNC Clearinghouse.  Present were many former members of the defunct NYC Direct Action Network, one of many groups borne of Seattle. Well-versed in creative direct action tactics, DAN members had the skills and experience to organize massive actions during the RNC.

Concerned that privileged white activists would dominate the anti- RNC movement, however, the group eschewed all organizing and instead chose to form a “Clearinghouse” where groups could announce, inform and recruit. (Some activists say direct action was also stymied by fears of government repression as well as a debate over whether it was productive to have disruptive actions that would likely be met by a violent police response.)

As a result, organizing for a direct action didn’t begin until 2004, and the first large-scale meeting took place in July, the month before the convention. Nonetheless, some 5,000 people participated in the “A31” actions, more than many organizers expected.

Afterward, one organizer, Eric Laursen, agreed the actions might have drawn tens of thousands of people –potentially enough to disrupt the convention and make a national impact –if organizing had begun the previous summer. The energy was there. What was lacking was the organizing.

In addition, the Ruckus Society passed on its usual role of holding a training camp in direct-action tactics before a major mobilization, further blunting momentum toward a large scale action.

The Clearinghouse also limited its appeal by relying on jargon-laden, consensus-based meetings. One RNC protest organizer, Jennifer Flynn, said activists with Still We Rise who attended Clearinghouse meetings “often felt uncomfortable with the structure and process.”

Still We Rise, a coalition of people of color led local groups that spent months planning RNC protests, was one of the few groups concretely linking local issues to anti-RNC organizing – but it was bypassed by most white activists.

People of color were active in organizing, staging a rally in Harlem and two separate “Poor People’s Marches,” one of which drew 20,000, the other about 5,000. At the United for Peace and Justice demonstration on Aug. 29, however, turnout among people of color was spotty.

There were many ideas on how to broaden participation – “consultas” throughout the major boroughs, door-knocking campaigns, rotating meetings around the city, a listening tour – but most outreach was limited to leafleting and a “come join us” approach.

Even though New Yorkers were overwhelmingly supportive of protests, they weren’t engaged in a lasting way.  One organizer says all the groups – “United for Peace and Justice, the NoRNC Coalition, etc. – [failed] to hook up with local activists in a number of areas,” such as the stadium and gentrification battles.

During the homestretch, the Clearinghouse held open houses at St. Marks Church where different groups set up tables to enlist new recruits. But the outreach turned into “inreach” activist networking events because so few new people showed up.

Weeks before the RNC there was an attempt to strengthen links between white activists and people of color. The concern of white activists dominating was (and is) very real. Issues around race are frequent stumbling blocks for the left.

A retreat was held in upstate New York under the banner “Uniting New York” that brought together about 75 key organizers. Instead of working on building a real radical, multi-racial network, the retreat devolved into a “white people need to confront their racism” workshop after a trivial comment made out of ignorance.

This stemmed from a tendency within identity politics that says while whites can try to address their own racism, they will always have white-skin privilege so they must defer to people of color. Such an approach turns dialogue into a one-way transmission between the enlightened and the benighted. It also saddles people with an overwhelming sense of guilt, while successful movements improve people’s sense of self-worth.

At the retreat, one participant stated that white activists “need to take leadership from people of color.” Leadership can’t be imposed; it comes from a compelling vision, a relevant strategy, creative organizing and a concrete program, not an identity.

Most people who attended the huge UFPJ march on Aug. 29 showed up to protest Bush. UFPJ is a coalition of more than 1,300 groups, but with few staff members it has a limited capacity to create protests. It is best at shaping mass political outbursts into a specific event, as demonstrated by Feb. 15, 2003, the RNC and the upcoming mobilization in D.C.

UFPJ’s raison d’être is to end the Iraq war, but it chose to frame the RNC protest as “We Say No to the Bush Agenda.” One of their organizers, Hany Khalil, said they were hoping for a large turnout among organized labor and liberals and to use that momentum to build a broader antiwar movement.

But organized labor, MoveOn and other Democratic Party stalwarts refused to take an anti-war stance so as to cover for pro-war John Kerry. If UFPJ chose to focus on the Iraq war, protests would have been smaller – there were many other multi-issue demonstrations – but they could have focused on building an anti-war movement whoever won. (In terms of numbers, an anti-war demonstration on March 19, 2004, drew 100,000 in New York City alone.)

For UFPJ, the RNC didn’t succeed in either building the anti-war movement or having a meaningful impact on the election. By the second anniversary of the Iraq war this March 19, protests had dwindled to 5,000 in Central Park (organized by the Troops Out Now Coalition), while UFPJ could only muster one busload from all of New York City for protests in Fayetteville, North Carolina.

Stanley Aronowitz says UFPJ has a“popular front” strategy of trying to unite people in the broadest possible coalition against the war, but at the cost of not engaging in strategic political discussions.

An attempt by Jobs with Justice to bring liberals and radicals together also fizzled. A series of meetings were held in the spring of 2004 with representatives ranging from the AFLCIO, NGOs, environmentalists and women’s groups to anarchists, Marxists and anti-war organizers. The meetings never progressed beyond information sharing. The liberal groups confined themselves to genteel protests and there was never any possibility that they would fund more radical activities, despite their much greater resources.

MoveOn declined to even attend the Jobs with Justice meetings; a member of MoveOn’s national board said the group didn’t want to be seen as “activists.”

Nor should The Indypendent be excluded from criticism. We had extensive discussions as to how to cover the organizing. In retrospect, our reporting was often boosterism. Agreeing that the RNC was a cynical ploy to exploit Sept. 11, we felt that we could help promote a large turnout through our reporting. But we weren’t critical enough of the organizing as it was happening, asking consistently what were the goals, what was the strategy and how groups were responding to the political context.

While it’s unfair to call the protests a failure, they didn’t live up to their potential. Clear lessons include the need to actively link larger battles to local issues and thereby elevate organic leadership.

There was also tremendous pressure to fall into the “Anybody But Bush” camp. This meant most groups failed to vigorously protest Kerry’s pro-war stance or held back on a direct action because the chaos might benefit Bush.

Maybe the most important lesson is that a dramatic event can only be achieved through creative, resourceful and well-thought-out risk-taking, too little of which occurred last summer.