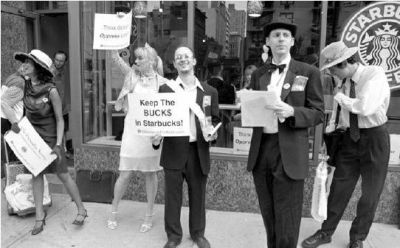 To touch off a defiant “sipin,” the Billionaires proffered a toast to “recordbreaking profits,” while Diva Denz phoned her stockbroker, demanding 1,000 more shares of StarBucks stock. But this celebration was cut short by the arrival of, alas, StarBucks Union picketers! Dr. DeBooks, in a fury not often exhausted by a Billionaire, snatched one of the union’s flyers and brought it inside the store. Reading out loud in unutterable indignation, he sounded off the union workers’ grievances, including absurd things like livable wages, a decent number of hours, bathroom breaks, and similar claptrap that you might often hear the indentured class complain about.

Thankfully, we Billionaires distributed our own flyers to the customers, as we had our own points to make. Union-busting is “just good business,” as we all know. And these unprecedented profits are surely leading to unprecedented pay raises, or at least Chairman Howard Schultz granted himself a 44 percent pay increase while leaving the baristas to their unlivable wages. Moreover, whining workers, if you need full-time status, just work more jobs!

At this point, the regional district manager appeared at the scene in an outrage over the turn of events. Without missing a beat, Billionaire Monet Oliver D’Place greeted him with our prestigious Better Billionaires Business Bureau Award for Outstanding Unfair Labor Practices, and as the manager blushed, surely from the unexpected honor, the stealthily corrupt Walkin Ondapoor snapped a camera on his priceless face.

The manager proceeded to escort us out the door, of course, to suppress the rabble outside. But we Billionaires couldn’t leave the comfort of the store without our own security. Indeed, the police arrived at the scene, while Buddy O’Bush, Ivy League-Legacy, and Ivan Yorz donned signs with slogans such as, “We Proudly Screw StarBucks Workers” and “Think Globally, Oppress Locally.” As the union workers rallied behind fired union worker Sarah Bender, we Billionaires chanted, “Sarah Bender, don’t defend her, get in there and work the blender!” and “StarBucks workers, get a clue, living wages aren’t for you!”

We then marched in triumph to another crowded StarBucks store, where we were greeted, as usual, with cameras and spectators. Ivy League-Legacy assured everyone that there was nothing to fear, as we had the situation well under control. And lo and behold, we had our police arrive yet again to protect us. Our bastion of Billionaires was, once again, triumphant. As we well know, “Big money, united, shall never be defeated!”