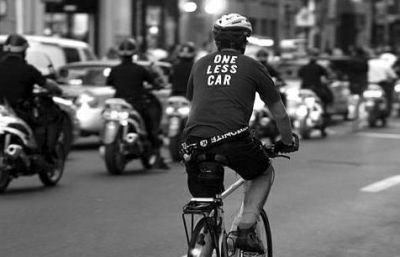 ONE LESS CAR, A LOT MORE COPS: “The orders are coming from really high up,” said Bill Dipaola, from the bike association Times Up! PHOTO: FRED ASKEW

Police arrested 48 Critical Mass bicyclists at the Aug. 26 ride, marking the highest number of arrests since the Republican

National Convention ride one year ago.

Accounts of the total number of cyclists varied since many riders left from different sites around the city, but Bill Dipaola, an event coordinator with the cycling activist collective Times Up! estimated that the number of riders totaled 500.

The latest arrests were part of a recent trend of heavier police presence and more arrests at the monthly rides, whose goal is to raise awareness of bicycling as an alternative means of transportation. At previous rides, police have wandered through pre-ride gathering places warning riders they might be arrested for riding their bikes and passing out literature.

“For the last four months they really haven’t announced anything,” said Dipaola.  He added that, from conversations held with riders before the event, many did not know there was a danger of being arrested.

“The orders are coming from really high up,” said Dipaola. “The police on the scene have told us that they don’t want to be there.”

According to Gideon Oliver, a lawyer representing several arrested Critical Mass riders in criminal and civil cases, ten riders were arrested in June and 33 in July.

“I was extremely disappointed in the police tactics,” said Oliver. “The ride was a lot smaller than it has been in the past. The thing is, a lot of us have been doing this for a year now, and it’s shocking that the city hasn’t come up with a better way to deal with Critical Mass. Someone will eventually get hurt or killed.”

One rider, who wished to remain anonymous for legal reasons, said that Union Square South riders left the pre-ride speakout and started south down Broadway. After turning east onto Eighth Street the ride went about two blocks before roughly 20 riders at the rear of the group were penned in by police in SUVs and on scooters.  “The cops ran up with no warning, very quietly, which I guess allowed them to pick off riders at the front and back of the pack for some time,” wrote one rider on the NYC Independent Media Center newswire.  Using arrestee accounts and police information, Oliver estimated that police arrested riders at four to seven different sites along the ride.

Dipaola believes that undercover police in the ride may be acting as agitators and leading riders to locations where arrests can be made more easily.

He added that the increased number of arrests reflected a trend by police of targeting pro-cycling events, noting an intimidating police presence at several of the recent Bike National Convention 2 rides and workshops hosted by Times Up! “It’s basically an attack on cycling,” he said.

To send a letter to Mayor Michael Bloomberg and Police Chief Ray Kelly protesting the treatment of cyclists on the Critical Mass ride: worldcarfree.net