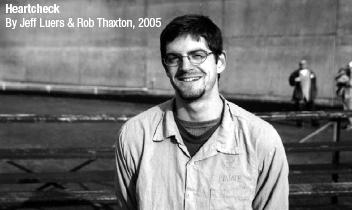 JEFF “FREE” LUERS, received a 22-year sentence for arson at an SUV dealership. He is incarcerated at a maximum security prison in Salem, Oregon. PHOTO: OSP LIFERS CLUB

The phrase “heartcheck” is prison slang to call someone out when you grow weary of him running his mouth. For example, if a person is wronged by another and he talks endlessly about getting him back, but does nothing but talk and whine – “Heartcheck!” Do it or shut the fuck up.

Jeffrey “Free” Luers and Rob “los Ricos” Thaxton have written a heartcheck for those who identify with today’s radical social movements. It’s disorienting to read a militant call to action in 2005. Much of the rhetoric and analysis would be more at home in a publication from the early anti-capitalist- globalization days of 2000, or even in times like ‘68 or ‘36. Note the scene of a masked figure aiming his slingshot at a line of riot cops that shines from within a smoking molotov cocktail.

In most of the radical circles I inhabit, militancy has fallen out of fashion as anarchists and others demonstrate a preference for working in issue-based coalitions, if not in neighborhood or workplace based struggles. There is a world of reasons for this shift in praxis that has often led away from direct action and barricade combat, not all of them negative.

Whatever you’re up to, odds are you’ll react defensively to this missive’s message. Then, if you’re up for it, you’ll question your commitment to revolutionary struggle and challenge yourself to walk the walk farther.

Luers highlights the SHAC7 (Stop Huntingdon Animal Cruelty) trial as an example to all anti-capitalists of the sheer monetary damage they inflicted on one brutal corporation with practical and exciting analysis. He suggests that the model be adopted not only to make profit difficult for egregiously inhumane corporations but also to disrupt the daily functions of international free-trade-enforcement organizations outside of their global summits. His call for a resurrection of the alliance between idealistic troublemakers and organized labor needs to be repeated everywhere from punk squats to union halls.

Similarly, los Ricos highlights the Kabylia Uprising in Algeria as an example of insurrectionary anarchist praxis today and the story was definitely news to me. Is there a bit of prison-sharpened machismo in some of this writing? Yes.

Is there also a sincere appeal to your deepest convictions? Absolutely. Read this zine and keep in mind where its authors are coming from. Imagine that you are a person who has given up everything to act on your convictions and as a result you spend every day in prison. You look out at the people and the social movements you had hoped to inspire, but you don’t see the kind of action that would really help you get through the day. Free and los Ricos deserve at least our attention.

Pick up a copy at Bluestockings, Vox Pop, Clovis Press or via email: freefreenow@mutualaid.org