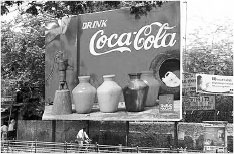 In July, the Coca-Cola Company threatened to sue award-winning Indian photographer Sharad Haksar for causing “incalculable damage” to its goodwill and reputation. Haksar had placed a giant billboard in Chennai, one of India’s largest cities, which displayed the Coca-Cola logo painted on a wall in the background of a photograph depicting water scarcity. The photographer claimed his work was “solely an expression of creativity.” Coca-Cola demanded that he remove the billboard and make an unconditional apology. He has refused.

According to anti-Coke activist Vandana Shiva, Coca-Cola was forced out of India in 1977, but returned in 1993 with the arrival of Pepsi. Today Coca-Cola owns 52 factories throughout the country, and Pepsi has 38. Combined, these plants remove more than 1.5 million liters of clean water a day from the ground.

The India Resource Center says that communities living around Coke’s bottling facilities are facing severe hardships. Those affected “are also some of the most marginalized communities in India – indigenous people, lower castes, low-income and agricultural day laborers.” Water scarcity and polluted soil and water created by Coke, the center adds, have directly resulted in crop failures, leading to a loss of livelihood for thousands.

In the village of Plachimada in the southern state of Kerala, where Coke opened a plant in 2000, the company drilled more than six wells and illegally installed high-powered electric pumps to extract millions of liters of pure water, according to Shiva. The level of the water table fell by 105 meters. The company then polluted the rest of the community’s water supply by dumping waste that spread into rice paddies, canals and wells. When Coke abandoned this practice, it began pumping dirty water into dry boreholes that had been drilled on-site for the disposal of solid waste – contaminating the aquifers, causing serious damage to harvests and also affecting navigable waterways. As the water supply deteriorated, the local tribal women had to travel miles to fetch potable water.

This part of Kerala is known as the rice bowl of India, but agricultural yields have plummeted. Worse, says Shiva, Coke has been distributing its toxic waste to local farmers as free fertilizer, which has created a public-health nightmare.

When Coke refused to account for its practices, the village council withdrew the company’s operating license. “But the loss of the license did not cost them the support of the state government,” explains Shiva, “which awarded the multinational giant a subsidy of two million rupees…. Pepsi and Coca-Cola have secured similar grants in all the Indian states where they have set up factories.”

Coca-Cola made extravagant promises to residents of Plachimada about employment and wage opportunities. But according to ActionAid, fewer than 400 residents were employed at the local bottling plant, whereas thousands of people had worked on the now-polluted land in what so recently had been a prosperous farming area. Green Left Weekly noted that Coca-Cola generated income of more than 10 million rupees every day, but spent less than 25,000 rupees on production, including wages and transportation.

A massive grassroots movement has emerged to hold Coca-Cola accountable for its crimes, and tens of thousands of people, primarily from rural India, are taking action to put an end to its abuses. Since 2002, residents of Plachimada have been on vigil 24 hours a day outside the gates of Coca-Cola’s local bottling plant. At Coke’s bottling facility near Jaipur, the sinking water table has created water shortages for over 50 villages, and more than 2,000 people marched last summer in protest. Over 7,000 people in Tamil Nadu turned out to protest a proposed Coca-Cola factory in their village.

In July, the state government of Kerala announced that it would take Coca-Cola to court over its abuse of groundwater, challenging an earlier decision by the state High Court.

While Coke has attributed activist actions to “a handful of extremists,” the resistance has periodically faced violent reactions by authorities. A peaceful protest outside a Coca-Cola plant in Mehdiganj ended when 1,000 demonstrators were attacked and injured by police and armed guards.

“Coca-Cola is stealing our water and our land and getting away with it legally. And they are calling our struggle for our livelihoods, our existence, illegal,” said Nandlal Master, one of the organizers from Lok So and the National Alliance of People’s Movements. “We do not accept this, and our struggle will prevail.”