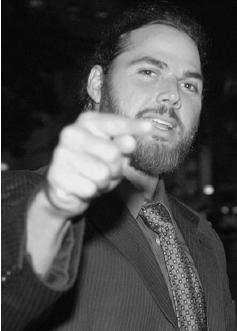 Geoffrey Blank, the 31-year-old leader of the No Police State Coalition, faces four years in state prison for charges of resisting arrest, assaulting a police officer, and inciting to riot. The charges – which the Brooklyn native says are trumped up and motivated by objection to his politics – arise from the dozens of times police have made arrests and seized sound equipment to shut down the “speakouts” the small group has been holding in Union Square for three years. Police arrest reports appear to contradict some of the charges; for others, Blank says there are witnesses or videotape that refute police testimony.

The group’s public forum carries on a century long tradition of radical politics in Union Square. Their goal is to defeat the corporate media’s “political filter.” Blank was driven to the streets by what he sees as a developing “totalitarian state” in the wake of September 11. While two years of speeches have seen Blank’s analysis turn increasingly Marxist-Leninist, speakers of all political stripes have grabbed the bullhorn to address the crowd lounging on the steps.

The din of Union Square’s traffic drowns out even the most impassioned of pleas a few yards from the speakout, but by New York City law bullhorns still require a permit (although an equally loud boombox playing nearby is just fine.) Just two of the 20 charges Blank faces relate to the use of the bullhorn, but he is representing himself in the Sept. 12 jury trial because “no bar-admitted attorney will challenge the ordinances on constitutional, freespeech grounds.”

The child of New York City public school teachers, he participated in the mid-1990s protests against the CUNY tuition hikes. He is still moved when describing his first realization of the power and viciousness of the police at a City Hall demonstration by students – “skulls being smashed, pepper spray, cops pulling their .38s on a protester that tripped up a cop beating someone with a nightstick.”

By his continued and visible refusal to back down to the police on his free-speech claims, Blank is trying to set an example of an empowered Left doing more than reinforcing its victim status by focusing on the latest setbacks. Says Blank: “If you want to have freedom of speech, you have to pretend you have it already.”