“They pay minimum wages. This store doesn’t. That one across the street doesn’t either,” says Manuel Guerrero, a union organizer for the Retail Wholesale and Department Store Workers Union (RWDSU). Guerrero walks down Knickerbocker Avenue’s busy retail strip in the Brooklyn neighborhood of Bushwick, cataloguing abuses on streets choked with cheap clothing and sneaker shops, bodegas, and 99-cent stores. 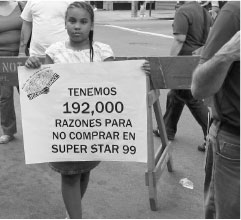 Mexican norteño ballads play in the background on a hot and hazy July afternoon as Guerrero explains how “There are retail areas like this all over New York and Brooklyn, full of immigrant workers not being paid minimum wages.”

But Knickerbocker Avenue is different, because workers like Miguel Gutierrez are fighting back. That fight was officially launched on May Day of this year when the immigrant-rights organization Make The Road by Walking announced a workers’ rights campaign called “Awake, Brooklyn!” in an attempt to bring attention to the abuse of undocumented workers. But the springtime organizing launch has turned into a long hot summer of meetings and campaigning of mixed results so far. Meanwhile accounts of abuses against workers continue.

“I thought you made $500 a week in America,” Gutierrez says quietly in Spanish over lunch at a cramped Mexican grocery along Myrtle Avenue. Gutierrez came to the United States with his brother and uncle, and within days of arriving, he walked into the Super Star 99 Cent Store on Knickerbocker Avenue and got a job. He stocked shelves, cleaned the store and provided customer service.

“My plan was to save a lot of money here, work for a few years and then return to Mexico, where I would open my own butcher shop.” But that was a little over a year ago and Gutierrez is barely scraping by.

Gutierrez shares his two-bedroom apartment in Bushwick with six other workers and family members to keep his rent low. He worked at the Super Star for a year, putting in six-day weeks at 11 hours a day for $250 a week. That amounts to about $3.75 an hour, or $2.25 below New York City’s $6.00 an hour minimum wage, a minimum wage that undocumented workers are legally entitled to.

For almost five years Make the Road initiated legal action against employers in the neighborhood who underpaid workers, but the group concluded that lawsuits alone were not improving working conditions in Bushwick.

“We did a survey of workers and people in the neighborhood and found things that the workers wanted: like health care, permanent higher wages, and fair treatment were really only gains that could be won if we had bargaining power. That’s when we moved towards unionizing,” says Andrew Friedman, one of the founders of Make the Road.

Low wages weren’t the only problem at Super Star. Gutierrez and his fellow undocumented employees received no overtime pay or even regulated breaks. They were allowed one 20-minute lunch break for every 11 hours they worked, and say they weren’t even allowed to leave the building to eat or buy food. They say the owner verbally abused them, and they were consistently pressured to work faster in unsafe conditions.

Gutierrez becomes visibly upset when talking about the speed-ups. He cites an example of how this pressure resulted in a serious injury when a fellow worker, Alfredo Huerta, sped down a set of rickety stairs that collapsed underneath him. He broke his foot when he hit the floor. Initially, Khubaib Massoud, Huerta’s boss, offered to give him $150 per week to compensate for lost wages. But when Huerta tried to apply for worker’s compensation, Massoud – who has remained unavailable for comment – challenged the claim. A legal resolution is still pending.

When asked why all the workers stayed despite these abusive conditions, Gutierrez says, “We stayed because it seemed too uncertain, we didn’t always know if there would be something better out there or not.”

But Workers Unite, the core group organizing for Awake Brooklyn!, was determined to do something, and ultimately it was the stories out of abuse at the Super Star that spurred them to organize a boycott. In June, when 50 workers gathered to discuss their options, Guerrero appeared with three nervous-looking men, including Gutierrez, who loitered by the door afraid to enter. “These men who work at the Super Star 99 Cent Store are suffering abuses and would like to unionize, they’re here to talk to you about a boycott.”

“How many hours a week do you work, Joel.”

“And how many days a week is that.”

“Joel, how much do they pay you an hour?”

The room exploded in sympathetic rage. Within minutes the meeting had decided to begin their campaign for unionizing stores along Knickerbocker Avenue with a boycott against Super Star 99.

The boycott was a great success at first. For eight days, shoppers refused to enter the store, almost without exception. But on the ninth day, when campaigners arrived early to begin leafleting, they found the store closed. Massoud had simply padlocked the graffitied metal shutter and cut the name of his store out of the dirty yellow awning.

Massoud, who has other stores in Brooklyn and Queens, had decided to cut his losses, and closed the shop. Gutierrez and the other Super Star workers were out of a job, and it seemed that the campaign might stall.

The Retail Wholesale and Department Store Workers Union immediately set out to find employment for the Super Star workers, and Make The Road alerted the New York State attorney general’s office about Massoud’s violations. The attorney general is now in communication with Massoud, and Andrew Friedman seems confident that he will return to Knickerbocker Avenue ready to talk with the union.

“If he [Massoud] signs a settlement with the attorney general’s office and comes back and meanwhile the workers unionize, it’s good. I’d read it as a full-scale success.” That may seem like a lot of ifs, but Friedman is confident that the attorney general can help improve working conditions on a case-by-case basis.

And so the campaign continues. While the attorney general deals with Massoud, Workers Unite has gone back to the drawing board and says it will soon be ready to announce a new Knickerbocker boycott, but this time against a business owner without other locations, so they can exert more pressure.

Meanwhile, Gutierrez is still working for less than minimum wage at a 99-cent store in Bushwick (He says he wanted to stay in the area, and that the retail workers union could only find him better paying jobs in Manhattan). His new boss is even apparently friends with Massoud. Gutierrez claims that conditions are better, but recognizes that it is not ideal.

Despite the setbacks, Gutierrez is still hopeful and plans to continue being involved with the campaign. “I didn’t used to believe that this could work or that the campaign could help, nobody did, because we didn’t think anyone could really help us with the U.S. government,” he says, finishing his Coke and preparing to head back to work. “But now we think that things are moving.”