Last year’s protests against the 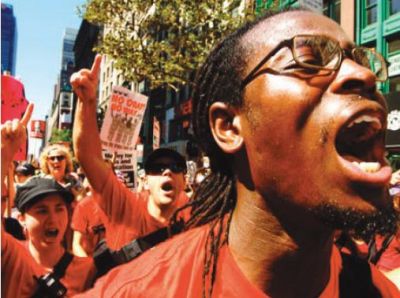 Republican National Convention at Madison Square Garden were the biggest at any political convention in American history. The Aug. 29 demonstration—despite Mayor Bloomberg’s refusal to give it a permit for a rally—was one of the largest of the last 50 years, up with the 1963 civil rights March on Washington, the 1969 antiwar Moratorium, and the abortion-rights rallies of 1989 and 1992. And

despite the police state atmosphere, the barricades and mass arrests, the neighborhood around the Garden blossomed with rainbow-colored “We the People Say No to the Bush Agenda” banners. Hundreds of thousands of people turned out to do just that, with near-unanimous support from New Yorkers. One year later, though, Bush’s near-fascist regime still controls the country. So as big as they were, did the protests actually accomplish anything to reflect all the effort that went into mobilizing them? Did they gain publicity for vital issues? Did they disrupt an oppressive institution? Did they lay significant groundwork for future activism?

Many of the answers are negative. Street sit-ins delayed a few delegate buses, and Code Pink protesters popped up inside the Garden, but otherwise the RNC went off unmolested. Much energy went into trying to defeat Bush, and dissipated after the election. The antiwar and labor movements are bitterly divided, and the main protests against the Iraq war earlier this year drew an anemic turnout. And outcry against the massive civil-rights violations during the convention, when police busted anyone they could catch in their orange nets and locked them up in a polluted bus garage, has been largely confined to the left and civil libertarians.

On the other hand, the protests’ size and ideological diversity were encouraging. Unlike the single-issue and identity-politics movements that composed much of the left in the ‘80s and ‘90s, virtually all demonstrators were outraged about multiple issues. The middle-class gay man spoke about poverty and homelessness as well as AIDS. The tattooed union electrician with an American flag in his baseball cap had a “Bush Lies, Who Dies?” sticker on his shirt. The 23-year-old woman spoke about Social Security, the Puerto Rican independentista about education and health care. And overall, people spoke about how the country has been “hijacked” by Bush’s far-right cabal.

Even if the demonstrations seem to have had little long-term effect, can you imagine what would have happened if no one had protested? If we’d let the Republicans come into our city unmolested, the far right and the corporate press would have gleefully written the obituary of any kind of dissent against their Mammonite-fundamentalist madness.

I’m proud that we didn’t. From the beaches of Coney Island to the swampland high-rises of Co-op City, we said no. But we’ve still got an incredible amount of work to do.