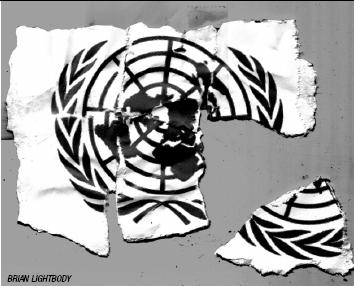 UNITED NATIONS, N.Y.—At the United Nations, one can consider all the environmental, political, social and economic dilemmas of the world. It is a dispiriting endeavor, in the late summer of 2005, as the U.N.’s 191 member states prepare to meet both at its 60th annual General Assembly and in a high-level summit of heads of state, premiers and foreign ministers.

Prospects for significant action are not encouraging. Nothing is likely to be achieved at either meeting.

Three drafts of the summit’s “outcome document” have already been written. The third draft contains such assertions as “We recognize that climate change is a serious and long-term challenge” and “We emphasize that progress in disarmament and non-proliferation is essential” and “We reaffirm our commitment to strengthen the United Nations.” No new ideas or proposals are presented in the 39-page document, which recycles a lot of material from the past 25 years of similar documents.

Despite the draft’s harmlessness, U.S. demands it either be disemboweled or replaced with a short statement were reported in the New York Times, the Washington Post and the Financial Times during the week of Aug. 22.

As usual, the Assembly and its committees will take up every problem under the sun. Its provisional agenda lists 155 items, many with subsections. Item 98, general and complete disarmament, has the most subsections at 30 – from notification of nuclear tests to problems arising from the accumulation of conventional ammunition stockpiles in surplus.

U.N. Secretary-General Kofi Annan has often spoken and submitted reports this year on the urgent need to reform the Security Council and to meet “Millennium Development Goals” by 2015.  China and the United States have already declared that they will not support changes in the Council.

The Millennium Goals include the eradication of extreme poverty and hunger, universal primary education, the promotion of gender equality, reduction of child mortality, improvement of maternal health and implementing environmental sustainability.  Those goals will not be met. Neither the political will nor the money to carry them out exist.

But everybody will go on talking about them.  Harvard University Professor John Holdren explored the climate problem at the United Nations last May 10. Said Holdren, “the problem of global climate by human-produced greenhouse gases in the atmosphere is coming to be understood as the most dangerous and intractable of all the environmental problems caused by human activity.” He continued, “the problem is highly intractable because the dominant cause of the disruption – CO2 emission from fossil-fuel combustion – arises from the process that currently supplies 80 percent of civilization’s energy. The technologies involved represent a huge capital investment ($12 trillion worldwide).”

Major change must start now, he said. But, as is well-known, the Bush administration won’t move on it, and as a result, effective world action is blocked.

Feeding the hungry, malnourished and undernourished is another intractable problem, though more susceptible to solution. A U.N.  report published Aug. 25 on the world social situation stated without reservation, “There is more than enough food in the world for all its inhabitants, and low-cost food supplies are produced in quantities sufficient to meet the needs of the growing global population, if food were distributed equitably around the world.” Instead, the number of food emergencies has increased from an average of 15 per year during the 1980s to more than 30 per year since 2000, the report said.

Malnutrition affects around 852 million people worldwide. It accounts for about half of the 10.4 million child deaths occurring annually in the developing world.

Which nations and what mechanisms block the equitable distribution of food around the world?

So it goes with every question that the General Assembly will take up – and fail to act on.