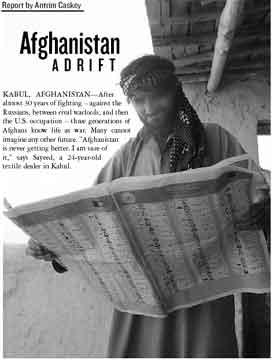 A prevailing attitude among dispossessed
young men in Kabul, especially Panjshiris from the north, is that the parliamentary elections scheduled for September 18 are meaningless; they don’t even consider voting. “They don’t care about the people. They care about their own pockets,” Sayeed says disgustedly when asked if he would vote. The problem, he continues, is, “the people don’t have education; only 15 percent of the people read and write. After school I could not go to university to learn.”

The figures for illiteracy vary substantially, depending upon who you talk to. For women, it’s estimated at 85 to 95 percent; for men, it’s been reported from 65 to 85 percent. In postwar Afghanistan, it is hard to know anything for certain.  The people I’ve spoken to who express hope for Afghanistan or any enthusiasm for the elections are almost exclusively linked to the United Nationsadministered Joint Election Management Body (JEMB) or working towards the elections in another capacity. Each international worker is mentoring a national counterpart, and when the international workers leave after the dissolution of JEMB, the nationals will take over their roles. These Afghans are voting; they have invested in the voting process.  Heymara, 26, a radio producer and reporter working for Sayara Communications, a media group that has organized three mobile theatre troupes to perform educational plays about the elections, told me that she would vote. But when asked if she was married, she shrank back as if from a flame and said, “Do I look married?” Heymara’s attitude toward life and her own capabilities are not the norm in Afghanistan.  JEMB civic educators are traveling throughout Afghanistan to lecture to villages on how the elections work. On Sept. 7, I visited Sargardana, a hardscrabble hilltop village just outside of Kabul’s old city, where Meherab Budin, 35, told me that he will vote. The JEMB educators have been to Sargardana several times—they say the repeat visits are critical to teaching Afghans how the system works. Budin would not say who he would vote for, only that he will “vote for the honest people that will work for the people. The vote is sacred.”

On Sept. 8, I met Sharnas, a burqa-clad 40-yearold, at Dehyaya High School on the outskirts of Kabul after a performance by the mobile theatre troupe. She is a cleaner at the Children’s Hospital in Kabul. Sharnas sat in a classroom with about 40 women from the surrounding mud-house villages while the men watched the performance. She said she would vote, but also complained of her swollen arthritic wrist and that there is “no water for drinking here.”

One of the first questions people ask me is where am I from. Saying the U.S.A. and New York draws smiles, gasps and sometimes a sardonic nod. From Yaqoobshag Ansari, who runs the Internet center at the Sahr-E-Naw Post Office in Kabul to Afghan National Air Force Commander Abdul Malick, the chorus is “US is my friend, they help us.” (I have so far only been in the north, and may receive a different welcome in the more conservative south.)

Americans do not always return those warm feelings, as I saw when I accompanied a delivery of fresh fruit and vegetables to two U.S. Special Forces bases in Paktika province, on the border with Pakistan. At the first stop, Afghan soldiers, presumably being trained by the Americans, quickly surrounded our helicopter. Then the Americans, dressed in tan desert fatigues, sped up to the craft on ATVs and Humvees. “Hey you!” an officer yelled at the gathered Afghans, jabbing his finger in the air, almost charging the crowd, “Get the fuck out of here.” It felt like that was a common attitude towards Afghans among the military and its U.S.  contractors: that they have important jobs to do and can’t let the Afghans get in the way.