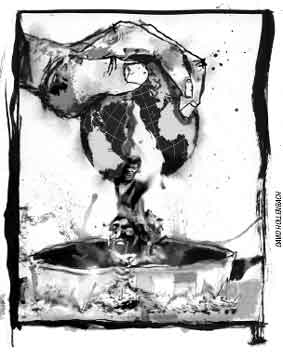 Apocalyptic events are occurring with rapidity and cumulative effect. President George W. Bush’s incompetence and pretensions are becoming clearer with each event.

The events – Hurricane Katrina and the destruction of New Orleans and other Gulf cities, gasoline and heating-oil price rises, continuing United States aggression in Iraq and Afghanistan, a series of food emergencies in Africa, unresolved nuclear weapons questions, the U.S.-manipulate debacle at the United Nations – are overwhelming.

As a phenomenon, apocalypse is difficult for one to encompass.  Apocalypse exceeds tragedy. It is not Biblical; it is contemporary and real. It reveals the inner character of situations, events, and people. It produces extraordinary levels of death and destruction.

Describing parts of Harrison County, Mississippi, after Katrina, Gov. Haley Barbour said, “It looks like Hiroshima is what it looks like.” Numerous American writers, painters, filmmakers have presented the reckless, violent, criminal, psychopathic aspects of American life and society.

Stephen Crane published Maggie: A Girl of the Streets in 1893, Maggie victimized by society and her family.  Robinson Jeffers wrote “Shine, Perishing Republic” in 1924, advising his sons to “be in nothing so moderate as in love of man… when the cities lie at the monster’s feet there are left the mountains.” James T. Farrell’s great trilogy, Studs Lonigan, appeared in 1932-1935. Studs, hanging out on the street corners of Chicago, embodied the purposelessness of America.  In the 1950s, Ad Reinhardt painted his black canvases, Franz Kline his symbolic black-and-white works.  Jackson Pollock went berserk on canvas.

William Baziotes painted monsters of the psyche. Nicholas Christopher’s Somewhere in the Night: Film Noir and the American City is a prophetic study, published in 1997.

He wrote:
“In film noir, a primary implication is that the city of tomorrow will be an apocalyptic city. “Noir continues to be one of the central cultural phenomena of the… American city… and emblematizes times of great stress.”

The quest of the individual in noir, Christopher said, “may devolve from a goal of illumination with a slim chance of escape … to one of bare survival while seeking out the least excrutiating torment.”

If America doesn’t courageously alter course, it is going to hit the jackpot. There are not many warning signs left to be observed along the imploding American way, in the collapsing system.