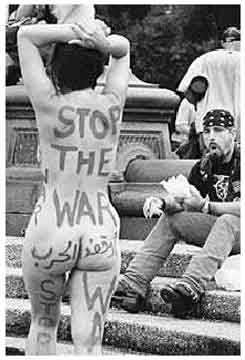 Naked protesting has flourished around the world in response to the Iraq War. In 2003, naked bodies spelled out simple and powerful anti-war messages throughout Europe, Australia and the United States. A March 5, 2004, CNN headline read “Naked anti-war demonstrations sweep world.”

Nudity as protest harnesses a corporate media that otherwise abstracts and sanitizes war. When the body is the battleground, baring it makes perfect sense. People for the Ethical Treatment of Animals waged their successful “I’d rather wear nothing at all than wear fur” campaign with the help of naked celebrities and direct actions.

In 2004, at the March for Women’s Lives in Washington, D.C., women used their bare bodies to punctuate messages like, “Keep your laws of my silky draws.” At the 2004 Republican National Convention in New York City, nine ACT UP! activists painted “Stop AIDS” and “Drop the Debt” on their naked bodies, getting their message out and garnering extensive media attention.

The World Naked Bike Ride 2005 is taking place in 12 countries to call attention to the global oil crisis and one of its remedies. In opposition to Australia’s support for the U.S. position in Iraq, Aussie singer and peace activist Grace Knight organized “Disrobe to Disarm,” in which 750 unclad women used their bodies to spell out, “NO WAR” surrounded by a heart. Knight cites as the “reasons for the nakedness: one is that it is total vulnerability … and in that vulnerability there’s also an awful lot of power.”

Scholar Isaac Souweine suggests that “nudity implies a righteous innocence.” The Dixie Chicks employed this type of innocence when they appeared naked on the cover of Entertainment Weekly after being pilloried for expressing shame at being from the same state as George W. Bush.

Nude protest comes from a legacy of civil disobedience in “personalist” politics, as led by Tolstoy, Thoreau and Gandhi. Their teachings emphasize the importance of the individual in social struggle. Personal dissent and resistance manifests through marches, boycotts, sitins, hunger strikes, breaking unjust laws, political rallies and political performances.

Nudity is the ultimate expression of the personal and intimate. Public nudity is a rejection of the hypocracy, materialism, and moral authoritarianism promoted through the state. Critics of public T&A write it off as self-indulgent or exhibitionist, or even dismiss it as a spectacle used by the hyper-sexualized media.

Souweine argues, however, that protesters show savvy by using the media to amplify their message. Some claim that the shock and giggle value simply obscure the message. This is a valid caution to any who dare to drop trou’ in public. It is important for the activists to communicate with their audience once they’ve got their attention.

The synchronized cheerleader letter forms carry the power of a collective voice, while avoiding a close-up shot on the baker’s dozens of hair pies. Block letters that circumnavigate nipples and belly buttons get your message read , but only if the word count is kept to a minimum.
One self-described radical Jew scaled a phone pole in Astor Place in New York in March 2005 and stayed there for two hours in mock crucifixion, draped in only a cloth bearing an anti-war slogan.

The entertainment value of activism in the raw is neither negligible nor accidental. It stands with other political performers from the Radical Cheerleaders and Billionaires for Bush to the Hungry Marching Band and Code Pink. These people invigorate and inspire the masses that gather for endless protests for endless wars.

On Aug. 15, 2005, a Syrian Artist, Hala Faisal, painted bold anti-war text in English and Arabic across her body and waded with angry gestures in the Washington Square fountain until police arrested her 10 minutes later. Hers was a strange prelude to the rage of those wading through the toxic soup in New Orleans.

For every body floating in the stagnant waters left behind by Katrina, there are dozens we do not see in unmarked graves in Iraq. On Sept. 24, activists may once again expose themselves to expose this truth.