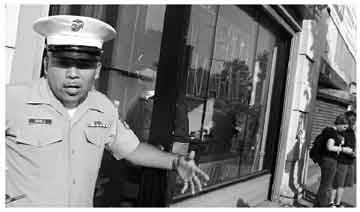 Hundreds of parents, students and
school board members are organizing groups around the country to protest aggressive military recruiting activities. Consider these recent actions:

On Aug. 30, a dozen people in Pittsfield, Mass. marched in the rain to protest high school recruiting in their community. The group handed out fliers advertising a public forum entitled ‘Is the Military Your Best Option?’

On Aug. 29, Latino activists in San Diego launched a door-to-door campaign to inform Latino parents how military recruiters use information about their children. Latinos make up about one-third of the total recruits in Southern California.

On Aug. 28, 300 mostly Latino protestors marched through East Los Angeles to rally against the Iraq war and military recruitment on college campuses.

On Aug. 28, charges were dropped against the five “raging grannies” accused of trespassing in July after they tried to enlist at a military recruiting center in Arizona (see below).  On Aug. 25, a group of students, parents and faculty “took over” the Wescoe Beach plaza at the University of Kansas. Members of a local counter-recruitment organization made speeches and called for an end to the war and the military’s presence on campus.  On Aug. 20, six protestors were arrested in Pittsburgh after police cracked down on a 100-person march against military recruitment.

Police shot at least two people with a 50,000-volt shock from a Taser gun. Another woman was bitten by a police dog. Over 11 complaints of excessive force have been filed.  On Aug. 13, members of the East End Veterans protested in front of the recruitment center in Riverhead, Long Island.

On Aug. 10, students and activists from The Truth Project, a local counter-recruitment group, held debates and protested at Lake Worth High School in Florida.  Such protests are the culmination of months of growing awareness that military recruiting is a major chink in the Pentagon’s armor. Along with the high-profile activism of Cindy Sheehan, counter-recruiting has helped rejuvenate an antiwar movement increasingly on the lookout for a catalyst.

That may come on Sept. 24 in Washington, D.C., when tens of thousands are expected to rally against the war.  Coupling the work of antiwar coalitions like United for Peace and Justice, ANSWER and Troops Out Now with the efforts of popular musicians like Thievery Corporation, Steve Earle, Le Tigre and Jello Biafra, the latest mass mobilization could be a seminal moment to further the campaign against military recruitment.

But despite the signs of resistance, protesters face an uphill battle.
The U.S. Army alone is spending an additional $500 million this year for such purposes.  Part of their effort includes an aggressive television campaign targeting both English- and Spanish-speaking audiences.  Recruiters are also offering greater incentives, such as signing bonuses that may soon average over $15,000.

Whether the money is paying off is questionable.  After missing recruiting goals for most of the year, the Defense Department reported on Sept. 12 that all active duty branches of the armed services have met their targets for both July and August.

The army, however, moved the goalposts, lowering its recruiting goals in May. The army also admitted that it will fall short for the recruiting year, which ends in September. And both the Army Reserves and Guard expect even larger shortfalls. The Army and its branches supply most of the ground troops in Iraq.  Counter-recruiters are encouraged, too, by a bill in Congress that will allow high school students to have more control over their personal information.

Under the No Child Left Behind Act, local school districts must give up names, addresses and phone numbers upon request by recruiters unless parents “opt-out” by signing a written statement. Many students fail to notice the opt-out forms in the pile of documents handed out at the beginning of the school year.

Sponsored by Mike Honda (D-CA), the Student Privacy Protection Act would prohibit military recruiters from acquiring students’ information unless their parents “optin” and express their desire to be contacted.  Some school districts aren’t waiting for politicians to act.

School boards in Madison, Wisconsin, Montclair, New Jersey and San Francisco have all taken steps to limit recruitment and inform parents how to opt-out. As a result, in Montclair opt-out rates are over 80 percent.  As communities across the nation become better educated on the matter, pundits and politicians are openly worrying about whether Americans will continue to contribute their sons and daughters to the war effort.

“There is no higher calling than our Armed Forces,” said President Bush in a recent speech that could reflect growing alarm at declining recruitment.