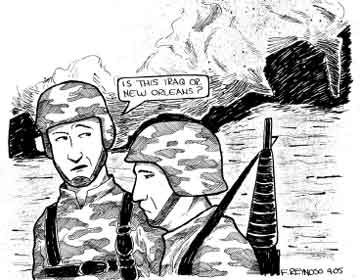 The corps delayed seven contracts, and one Louisiana official observed, “It appears that the money [for strengthening levees against hurricanes] has been moved in the president’s budget to handle homeland security and the war in Iraq.”

Yet always alert to spin gold from tragedy, the President’s friends are cashing in. Three early winners in the gargantuan Gulf Coast reconstruction – Halliburton, Bechtel and Fluor – have made away with billions of dollars from “rebuilding” Iraq. Halliburton, with a little help from former FEMA chief Joe Allbaugh, landed a $500 million contract on Sept. 1.

This rank cronyism is symptomatic of a corrupt administration where loyalty and connections are all that matter. It’s not just incompetence, however. The murder of New Orleans was the direct result of the “drown the government in the bathtub” philosophy and its depraved indifference to human life.  Thousands of people drowned in a bathtub called New Orleans.

New Orleans also got a dose of Iraq-style military occupation. The checkpoints, SWAT teams, armored personnel carriers, house-tohouse searches for guns and dusk-to-dawn curfews snuck in on rumors masquerading as fact.  The media-hyped stories of mayhem were dismissed quietly. Police told the London Guardian, “We don’t have any substantiated rapes,” while military and civilian officials cast doubt on a widely circulated report that shots were fired at a rescue helicopter outside a hospital on Aug. 31. In many recorded instances, survivors were held at gunpoint at police checkpoints and treated as prisoners in purgatorial holding camps.
The media played along with the stagecraft – broadcasting shots of a concerned Bush peering out of the window of Air Force One that “detoured” (how he must have been inconvenienced on his vacation). Few dead bodies made it onto television, as FEMA urged the media not to show them – just as the Pentagon tries to censor images of dead Americans from Iraq.

As for the looting that recalled the fall of Baghdad, never mind that most were scrounging supplies to survive or commandeering vehicles to flee. And the world now knows, as the captions of two strikingly similar photos described it, that black people “loot” for groceries while white people “find” groceries.

Treating desperate survivors as criminals was just one facet of a lethal racism. We may never know how many people died because search-and-rescue operations were suspended to uphold the sanctity of private property.  And to deny that race was a factor when thousands of African-Americans were crying out for help on national television is not to be color-blind but reality-blind.

They are also blind to the reality of an America polarized between the filthy rich and the dirt-poor.

Then again, this administration is famous for stating, “We create our own reality” – a reality that denies the link between global warming and extreme weather or that destroying Louisiana’s wetlands would lead to more devastating storm surges. And it will try to deny the damaging effects of pumping billions of gallons of toxic stew into the Gulf of Mexico. After all, Bush’s Environmental Protection Agency covered up the health disaster from Sept. 11, and, in the words of one EPA official, “The budget has been cut and inept political hacks have been put in key positions.”

The next task is the official whitewash, with Bush declaring, “”I’ll lead an investigation of what went right and what went wrong.” But just as Hurricane Ivan last year should have been all the warning we needed, Katrina portends the next Republican-led apocalypse – whether it comes from the incompetence of ideologues or the blindness of fanatics.

It might be in the form of nuclear weapons – the Joint Chiefs of Staff are recommending the preemptive use of nuclear weapons. Based on the slipshod, politically driven intelligence services, it seems the perfect strategy for igniting a global holocaust.

Or it could be avian flu. Few take notice, but the virus has jumped the species barrier repeatedly and has the potential to kill millions of humans. Instead of aggressively addressing the threat, the Bush administration is diverting funds to “bioterrorism” to research obscure diseases that pose virtually no danger to humans.
It’s all connected.