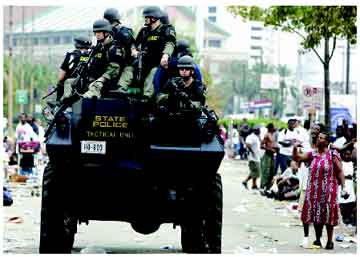 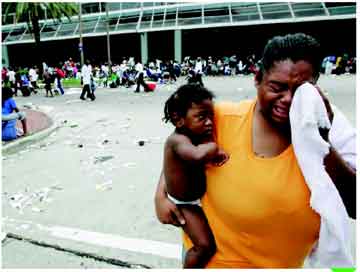 God sent the Flood to punish us for our sins,” said Reverend Willie Walker. I flinched and questioned him with my eyes as we sloshed through New Orleans. “For years we didn’t challenge the system,” he said. “We didn’t demand that the levees be fixed. Political apathy is sin and we have been punished.”

He hollered out that he was a pastor at Noah’s Ark Missionary Church. I looked at the men and women sitting on the porches. They had been poor for a long time.  Reverend Walker’s castigation of them was the mirror image of the comment by Rep. Richard Baker of Baton Rouge who said, “We finally cleaned up public housing in New Orleans. We couldn’t do it, but God did.” When the words of the pastor and the politician are placed side by side a common desire is revealed, to excuse the destruction of those beyond the reach of God or Nation.  Instead of asking how God or Nation failed the people, they assume the people failed the test of faith.

I walked toward a man, opening my bag of food. Before I got close, he waved me away. “I have enough water and food to stay alive,” he said, “That’s all I need to do right now, is stay alive.”

The next day, the Reverend and I stood knee deep in dark water. A boat sped toward us. Inside it a rescue worker named Tim hovered over a gaunt 87-year-old man lying in a fetal position. A defibrillator wire coiled out of the man’s chest, the blood on it still wet. Tim fanned the man’s face with his hat. “Hang on, ya hear. We’re gonna get you out.” The man looked around with wet, scared eyes. “Can we get him to the shade, he’s cooking.” We pulled them under a tree and yelled for help.

“Looks like days, man. We found him abandoned in an attic,” Tim said. “He’s gonna be fine.” It sounded more like a hope than a statement. A van drove up and we hoisted him in. After they left, I saw him in my mind, old, voiceless, begging through his eyes for help. I looked at the quiet city. Thousands of people were trapped in their homes. They had eaten all their food and drank all their water. They were dying now.

I climbed into a boat with Tim.  We pushed off. Other reporters saw us and splashed through the water to get in. Cameras clicked.

Notebooks held like poker cards.  Downtown New Orleans was a lake. A boy waded through the streets with an air-conditioner on his shoulder. The cameras followed him, clicking. A man pushed a shopping cart though the dark water.

We sailed between buildings.  Electric power lines drifted like a web in the water. Hoods of cars jutted like stones above the tide. The captain cut the engine and drifted up to a home where a family stood.  “The federal cowboys are coming.  We wanna get you out before they take you by force.”

“Ma’am, why didn’t you leave before?” a reporter asked.

“I wanted to protect our property, but material things ain’t worth our lives. I wanna get my son outta here.”

“Hold on. Hold on,” they said, and adjusted the cameras.

“Please don’t take pictures, I don’t look decent,” she said. They aimed the lens at her. She crossed her arms over herself.

The cameras clicked and clicked.  Why did they need to get a picture of her at her worst? She asked to be allowed her dignity, but dignity doesn’t sell newspapers. Degradation does. It gives the readers proof of the distance between them and the poor.  It gives the chance to pity someone who must be saved, and salvation has always been the last disguise of power. What the survivors need is not salvation but someone to share their burden. I learned this during the constant search for those trapped in buildings and those simply hiding out. On the last day of the boat mission, we got five men to abandon their flooded homes. One of them, Danny Zilucca, sat with me on the boat as the truck towed it along the highway.

“Thank you for talkin’ sense into me. Don’t know why we held out so long,” he said.

“Why didn’t you go to the Superdome?”

“When you hear about all that craziness, why would you want to go there?” he said. “It seemed safer to stay. We got food and water to last.” He kept looking around at the city, as if seeing it for the first time.  The more he saw, the quieter he got.  “What’s lost of New Orleans that may never come back?” I asked.  Danny turned, wiped his face and closed his eyes.

“I’m sorry,” he said again and walked to the end of the boat. He stood there weeping as we drove through the ruined city.

Danny returned and tried to say why he stayed in the abandoned city, but he would choke up and then for my sake, try again. I got for the first time a sense of what had been lost. It was too immense to feel fully. Hundreds of thousands of people had left behind everything that gave their life meaning, their loves and home and friendships. It was a loss that preachers and politicians would try to fill with God and Nation. Faith in the future would replace the pain of the past. It would numb the loss without necessarily healing it, and as I sat on the boat listening to him I realized how numb I’d become to survive.

When I first came through Baton Rouge Airport, I half jogged through the terminal and ran past a small chapel room. Now I saw it again, and like the first time walked to the bar, the restaurant, the videogame room. I walked around in a blind exhaustion, looked up and saw the chapel room again, and this time opened the door.

In the back was a dimly lit room with pews. I sat down and held my face in my hands. In my darkness I saw families walking through ruined streets, stunned and hungry.  Women carried children too weak to walk. Men asked for help I could not give. In my darkness I saw the pain and desperation flooding their eyes.  When we looked at each other their desperation poured into me. I leaned over and pressed my palms over my eyes. My chest heaved. I tried to hold it back but against my will, against the dams built to keep me safe from experience, all the water I saw and waded through came streaming down my fingers.