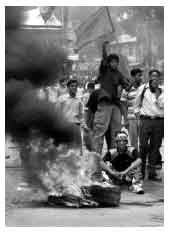 The Communist Party of Nepal (Maoist) announced that its guerrilla forces, the New People’s Army, will observe a three-month ceasefire. This is particularly significant in that the move is a unilateral one. The regime might decide to respond in kind, and reign in the Royal Nepali Army, which is reportedly unhappy with the war and the king.

There have been two ceasefires since the People’s War began in 1996—from June to November 2001 and January to June 2003. But these were declared by both sides, and accompanied by peace talks with the regime. This time, having bested the RNA in at least one recent major battle, the Maoists control about 80% of the country.

In past peace talks, the Maoists’ insisted on the convening of a national assembly to fashion a new constitution as their condition for ending the revolutionary war. Persistent conflict between the legal political parties and the king, greatly exacerbated since King Gyanendra seized absolute power, has allowed the Maoists to play the two off against one another. But after seizing power, declaring martial law and unleashing a wave of terror against his mainstream political rivals, Gyandendra proposed holding talks with the Maoists only to find them no longer interested.

Seven Parliamentary Parties The seven political parties whose members constituted 190 out of 205 representatives in the dissolved National Assembly have formed an alliance against Gyanendra. They had not challenged the monarchy (which dates back to 1768, and involves a strong Hindu religious element) in principle, but recently the two largest parliamentary parties, the Nepali Congress Party and the Nepal Communist Party (United Marxist-Leninist), held important meetings in which they abandoned support for the institution. They have expressed interest in holding talks with the Maoists in order to coordinate opposition to the dictatorship.

Increasingly emboldened, the alliance held an illegal demonstration of over 5000 Sunday, the largest since the king seized power.

Now, Gyanendra’s worst fear is a united front of the Maoists and the mainstream parties. The king’s international supporters urge a restoration of the parliament under the old rules as the best defense against Maoist revolution. But particularly if that doesn’t happen, it seems as though public demonstrations in Kathmandu will include a Maoist element agitating, alongside the alliance parties’ supporters, for an end to the monarchy.

The party presence in the capital and surrounding region (where most of the wealthy live) is reportedly weaker than in the provinces, although its student and women’s organizations are quite powerful in the city. A united front could provide conditions for a more powerful presence, even as a ceasefire allows the Maoists to further consolidate political power in the zones more or less under its control. The relationship between the People’s War in the countryside and the capital city of Kathmandu is the crucial issue as Nepal faces the very real prospect of revolution.

U.S. ambassador James Moriarty has warned that “Nepal is getting to the point where its very existence is at stake,” and in June raised the specter of guerrillas marching into downtown Kathmandu “within the next 12 to 14 months.”

The Maoists plan to complement their conquest of the countryside with an urban insurrection. As Prachanda told Time Magazine in April, “Our strategy for this last stage will be to fuse urban insurrection to protracted People’s War.”

The plan, is that the residents of Kathmandu won’t simply line the streets to meet columns of arriving guerrillas, but be active participants in an uprising during or before the latter’s advance.

The base areas have indeed been consolidated and expanded in the last four years, and Prachanda has intimated that victory (i.e., seizure of power in Kathmandu) may be near. The Maoists do want to encourage the mainstream parties’ actions against the palace, and to promote the advocacy of democracy versus monarchy, as key to winning in the city. Not because they want a return to the former set-up in which corrupt parties (including the several “communist” ones) serving the elite dominate an ineffectual parliament. They want a secular, socialist republic, radical land reform, universal education and medical care, equal rights for men and women and members of all ethnic groups, abolition of the caste system.

In any case, if we start to hear about massive rallies in Kathmandu involving both the alliance parties and the Maoists, and maybe defectors from the military and police, we will hear the death-knell of Nepal as a Hindu kingdom trapped in the Middle Ages. And then maybe, soon thereafter, the strains of the Internationale.