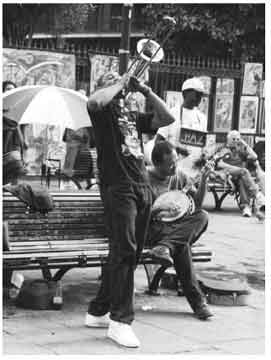 The brass-band tradition continues
to this day, with groups like the Dirty Dozen, the Forgotten Souls and the Tremé Brass Band. Listen to the Dirty Dozen’s version of “Just a Closer Walk With Thee,” booming bass drums and growling horns breaking into a chaotic, swaying march, and then you realize: This is music for a funeral – the sorrow-into-joy second-line processions by which New Orleans bids farewell to its most beloved. Ironically, the Dozen cut their Funeral for a Friend album in December 2003, a month before the sunset of street musician Anthony “Tuba Fats” Lacen, to whom the album is dedicated.  New Orleans’ second great musical tradition is piano players. Out of ragtime, rhumba, boogie, Chopin and whorehouse ivory-tickling came a raft of greats: Professor Longhair, the mad genius James Booker, Dr. John, Champion Jack Dupree and more. Fats Domino was playing rock’n’roll years before Elvis, reworking Dupree’s dopefiend folk song “Junker’s Blues” as “The Fat Man” in 1950. Little Richard, in my taste the hottest of all the primordial ’50s rockers, did almost all of his records in New Orleans with local musicians, fueling the frenzy with Earl Palmer’s drums and Lee Allen’s sax.

New Orleans singers hit the charts regularly in the R&B and soul eras of the ’60s, mostly as onehit wonders like Ernie K-Doe’s “Mother-in-Law,” Irma Thomas’s “Time Is on My Side” (covered by the Rolling Stones for their first big U.S. hit) and Aaron Neville’s ballad “Tell It Like It Is.” On his exquisite 1981 EP Orchid in the Storm, Neville’s singing evokes the evanescent bliss of religious ecstasy, a heroin high and a teenage boy in his first slow dance.

By the 1970s, New Orleans music was largely gone from the national charts, but it was experiencing another great efflorescence. The city’s African-rooted soil was fertile ground for funk, most notably the minimalist grooves of the legendary Meters, which hip-hop artists would later sample almost as much as they did P-Funk and James Brown.  Scores of lesser-knowns cut amazing records too, like Roger and the Gypsies’ “Pass the Hatchet” and Eddie Bo’s “Hook and Sling.”

The city’s music scene isn’t immune to the poverty and racism that surround it. Cyril Neville, the youngest and most political of the Neville Brothers, once described it as “a weird mix of beauty and violence.” Tuba Fats was only 53 when he died. James Booker and others did time in the notorious Angola state prison for drug offenses.  Professor Longhair, now the icon of the city’s piano style – his portrait hangs over the stage at the club Tipitina’s – was suffering from malnutrition and working as a card hustler and record-shop janitor when he was rediscovered by a white blues fan in 1969. One well-known jazz spot closed last year after the owner was arrested for killing a homeless man who’d been selling beer in front of the club. And while the musicians are racially integrated, the audiences usually aren’t.

Most important, though, New Orleans’ music is proudly local, intensely indigenous, part of the city’s life in the way corporate entertainment product can’t be.

Music is played for the community, to party, not purely in pursuit of stardom. You might hear bands mix century-old jazz flavors with hip-hop beats, follow a bebop-era standard with deep funk. These qualities, and the unique cultural ecology that produced them, are grossly endangered by the destruction from the hurricane and the land grabs that are likely to follow.

What I fear is that if the reconstruction of New Orleans concentrates on maximizing real-estate profits and rejects rebuilding communities, the city’s vital music scene could be reduced to overpriced black music for white people, either as frat party or museum piece. Worse, it could end up like the Bourbon Street tourist traps that feature bands playing ’80s MTV covers – like a McDonald’s in the land of red beans and rice.