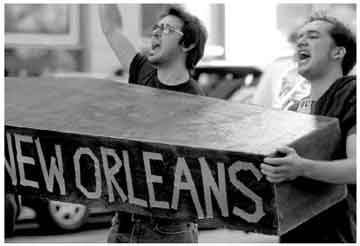 Disgusted by the lack of response by FEMA and other governmental organizations, grassroots groups have taken the lead to organize relief for victims. In New York, the Universal Hip Hop Parade and Critical Resistance are organizing food, water and resources to take to affected regions.

Grassroots Artists Movement (GAME) is conducting a drive throughout the four boroughs and New Jersey. R.E.A.C.Hip-Hop held a candlelight vigil at Union Square on Sept. 4. The Malcolm X Grassroots Movement quickly mobilized a donation drive that brought in nearly a ton of needed supplies.

Hip-Hop writer and activist Kevin Powell sponsored a rap concert Sept. 1 at the Canal Room featuring artists GAME and Brand Nubian in front of a crowd of 150. The donations collected filled one tractor trailer.

According to John Kim, an organizer with the Hip Hop Political Conference “[We] were scrambling to locate another 18-wheeler. But then a most amazing thing happened. A black brother happened to pass by… It turned out that he was a truck driver and owned an 18-wheeler in his driveway… We ended up filling three-quarters of this second rig.”

Palestinian poet Suheir Hammad organized a benefit reading called “Refugee to Refugee” building upon the common parallels of Palestinians and those displaced by the hurricane, including the right of return.

“The people of New Orleans will not go quietly into the night… while federal relief funds are funneled into rebuilding casinos, hotels, chemical plants and the wealthy white districts of New Orleans like the French Quarter and the Garden District” said Curtis Muhammad, spokesman for Community Labor United.

Organizers have tied the current relief efforts to larger issues of social justice. Kamau Franklin, an attorney and organizer with the Malcolm X Grassroots Movement sees many lessons to be garnered from Katrina. “[We need to have] structures in place to bring relief to the masses of our people, that means having centers where community organizing happens on a daily basis, providing schooling, recreational activities, employment, housing.

The lesson is learning how to gather resources and to create institutions that distribute power to people because that’s the next step.”