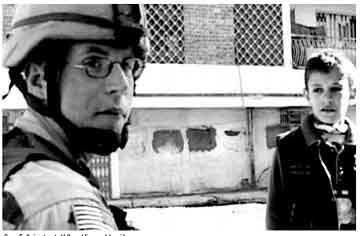 When the antiwar movement that converges on Washington, D.C., on Sept. 24, it will, thanks to Cindy Sheehan, have wind in its sails. The case will be made (again) that the best way to support the troops in Iraq is to bring them home now.  But who are the troops? What are they doing exactly, and how do they feel about it?

In Occupation: Dreamland, a gritty documentary about a squad of soldiers stationed on the edge of Falluja, Garrett Scott and Ian Olds present a revealing, unvarnished glimpse into the day-to-day routine of the occupation. Narrated by the soldiers themselves, the movie is set in the months before the “City of Mosques” exploded in open rebellion against the U.S.  occupation in April 2004. The film conveys the reality of war – long stretches of boredom punctuated by sudden, unexpected bursts of violence.

The camera allows us to follow members of the 82nd Airborne as they make almost comic public relations forays by day, raid people’s homes by night, endure repeated insurgent ambushes, and kill time in their barracks listening to death metal and wondering why the fuck they are in Iraq.

Locked in a deadly game of cat and mouse with an invisible enemy, these grunts come across as neither heroes nor psychopaths (with one exception), but rather as people with limited life opportunities resigned to working an unpleasant job. They show more curiosity about why the war is being fought than the average member of the media and they know that their lives are held cheaply by more ambitious higher-ups.

At the same time, there is never any doubt about whether they will carry out their orders. No Camilo Mejias or Kevin Bendermans in this bunch. Perhaps the most shocking scene occurs when a large group of soldiers are subjected to a scathing re-enlistment pitch in which they are told that they

might as well sign up again since they will leave the Army unable to make it in the real world.

Occupation: Dreamland drifts at times, moving from one pointless or counterproductive mission to the next.  The pacing of the film, however, captures the steadily brutalizing impact of the war on both frustrated soldiers and local residents. Unfortunately, the film only presents Iraqi voices in passing – when they are pleading not to be detained or arguing with soldiers who drop in on an auto repair shop to chat up the locals.  The Fallujans make it clear they are a proud people tired of empty promises and gun-toting foreigners ransacking their homes. The soldiers know they are helpless to solve the problems around them and can only offer friendly platitudes. And the audience, for its part, possesses the tragic knowledge that the situation will soon get much, much worse.