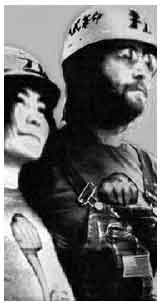 While many radicals of the 1960s became liberals or conservatives, or went all the way and committed suicide, writer Tariq Ali has been steadfast in his revolutionary convictions. In Street Fighting Years – An Autobiography of the Sixties, originally published in 1987 but reissued this year with the addition of an interview with
John Lennon and Yoko Ono, Ali tells of his youthful travels on the heels of Ché Guevara in Bolivia an witnessing the bloody carnage of U.S. imperialism in Vietnam. Also part of this lengthy but engaging book is the writer’s recollections of massive student and worker upheaval in Europe and Asia.

The cliché goes, “If you remember the ‘60s, you weren’t there.” Nonetheless, the clarity and breadth of Ali’s experiences during the radical decade put you squarely in the times.

Before he became a leading leftist voice, Ali slipped into Ché’s revolutionary Bolivia and encountered reactionary generals who, Ali muses years later, said they wished they had killed him along with Ché.  Perhaps the most powerful images of the book come from his diary of visiting war-torn Vietnam. In his entry for Jan. 29, 1967, Ali describes a Vietnamese city whose hospital was bombed by U.S. planes, “Two hundred dwellings have been destroyed.  Dang Batao, the local Red Cross organizer, was burnt to death. … Impossible to visualize this agony in the West … I look for military targets.  There are none.”

However great the destruction in Vietnam, Ali found inspiration in the resistance of the Vietnamese people and was a leader in the British-Vietnam Solidarity Campaign. For the author, the resistance to imperialism in Asia became connected to student and worker rebellion in Europe. It built to a crescendo in Prague, Paris, Berlin and London in 1968, and there are three chapters dedicated to that year.

Ali also goes back to his native Pakistan to work against the military dictatorship, and is met by comical rumors spread by the Islamist right-wing press that he “fornicated with ‘dozens of Jewish girls in one afternoon.’” An interview conducted with John Lennon and Yoko Ono in 1971 adds insight into both Lennon’s evolving radicalism and Ono’s feminist influence.

It has become fashionable for many of Ali’s contemporaries to blast their ‘60s idealism and activity.

For Ali, the meaning of those years is that resistance to empire continues with the unabashed goal of taking power from the capitalists and returning it to the people. Street Fighting Years is a good read for anyone wanting to get beyond the usual tag of the ‘60s as being drug laced and self preoccupied.