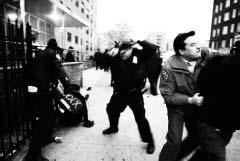 Police (right) look on as a pair of protesters drop a banner from the top of Casa del Sol during a Dec. 12 protest.  Moments later, police attacked a crowd of about 60 people who had gathered outside the long-time community center.  Seven people were arrested.

Casa del Sol, located on 672-674 E.  136th St. in the South Bronx, has been home to a number of activists and cultural projects since it was first squatted 20 years ago. It hosted hundreds of RNC protesters in August, about 30 of whom stayed to help revitalize the space. Police cleared the building Nov.  30. Hours later, it was gutted by a mysterious, four-alarm fire. The building is now under the control of ACORN, a controversial non-profit group that has vowed to build affordable low-income housing in the building.