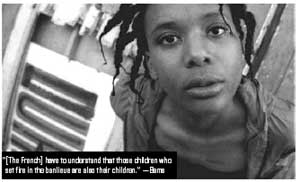 Questioned about the recent rioting, French rappers expressed little surprise: “There has been a smell of gas over the suburbs for 20 years, the two kids trapped in the power transformer at Clichy were the spark,” said Stomy Bugsy (formerly of the group Bitter Ministry), referring to the deaths of Bouna Traore and Ziad Benne, who were electrocuted while evading the police.

For the past 10 years, French rappers have been the “loudspeakers” (as Joey Starr, of NTM puts it) of the banlieue: the suburbs where projects house immigrants, who were brought to France as a cheap labor force after World War Two, and their descendants.

Hip-hop first hit France in 1982 when Bernard Zekri, a Frenchman of Algerian origin and a pioneering rap producer in the United States, organized a tour of deejays, rappers, breakdancers and graffiti writers, such as Afrika Bambaataa, Fab 5 Freddy, Rock Steady Crew and Futura 2000. Hip-hop was quickly adopted by French suburban youth, who idealized American culture and identified with the plight of youth in Brooklyn and the Bronx.

The first French rap compilation, “Rapattitudes,” appeared in 1989. Initially, French rappers borrowed heavily from their American models, but they quickly developed a Gallic idiom, with influences ranging from the troubadours to North African raï music to surrealism. (The cover of TTC’s album Ceci n’est pas un disque (This is Not a Record) is a pun, for example, on Magritte’s painting Ceci n’est pas une pipe.)

In addition to offering a signature culture for the banlieue, rap became a way for immigrants and children of immigrants, struggling for acceptance, to prove themselves through a mastery of the French language:

As French rappers gained popularity, many returned to their roots for inspiration. Passi, for example, organized a collective of French rappers of African origin in 1999, which he gave the name Bisso Na Bisso (an expression in Lingala meaning “between us”). Their album, Racines (Roots), which mixed

Congolese rhumba, hip-hop and zouk, received critical acclaim in both Europe and Africa.

An intersection of the global and the local, French rap points the way to a rich, post-colonial French culture. And, yet, what rappers describe is an impasse.

(DJ Sya and Soprano note that the Mediterranean post city of Marseilles was relatively calm during the riots, in part because the largest housing project holds roughly 6,000 people, as opposed to over 20,000 people in some Parisian projects. There is also a greater integration of immigrants in Marseilles).

Recently, French newspapers such as Le Monde and Libération, have been printing rap lyrics, now

seen as prophetic: “There had better not be a police brutality or the city will explode / The projects are

“The ministers, rather than slumbering in the assembly, skipping class like we did as kids,

would do better to listen to French rap,” quips Rim-K of 113. Asked whether rap is a form of politics,

however, most respond obliquely. “My politics is poetics pushed to an extreme” claim, for example, The

Wise Poets of the Street.

“Hip-hop is based on a détournement,” says the group TTC – a word that means to turn something

in a new direction.

Take Mathieu Kassovitz’ 1995 film Hate, for example. The three suburban protagonists visit Paris, where they are visibly ill at ease, and pass in front of a billboard with a picture of the earth viewed from space and the caption “Le monde est à vous” (“The World is Yours”). Saïd, who is always equipped with a can of spraypaint, jumps up and changes the “v” to an “n” so that it reads “Le Monde est à Nous” (“The World is Ours”), transforming the “yours,” which failed to include him and his friends, to a localized “ours.”

This problem of belonging is a central issue for French rappers. Attacks on emblems of French

nationalism, such as Monsieur R’s controversial line “I piss on Napoléon and General de Gaul,” reflect growing frustration with the failure of the republican model of integration.

Rappers make plain that the state does not see all as equal. Rather, those who do not conform to the white, Catholic norm are stigmatized by their names, speech and appearance. “My large nose, my dry,

For the French MCs, the matter of belonging should have been decided long ago: “I feel completely French,” says Ahmed from La Caution, “I don’t have the social reflexes of Morocco or Senegal.”

Asked to comment on the riots, rappeuse Bams remarks that “[The French] have to understand that

those children who set fire in the banlieue are also their children.”