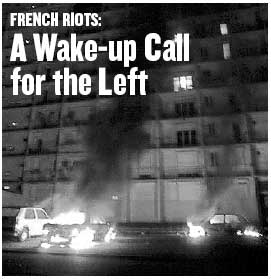 In the meantime, the French government has been busy enacting repressive measures,

putting into effect a 1955 law passed during the Algerian war of independence that allows municipal curfews, removes the right to demonstrate or assemble outdoors or indoors, and censors information.

Activated on Nov. 9 for 12 days, the state of emergency was subsequently extended for

three months. This occurred on the same day that the situation in the suburbs had reportedly returned to “normal.”

Since Nov. 9, information regarding the nightly incidents has been much less forthcoming, possibly indicating media censorship. Another “anti-riot” law dating from the student unrest in 1968, and repealed in 1981 when the Socialists came into power, has been reinstated, allowing for longer prison sentences for those arrested in the streets. At the same time, Parliament voted in another law that revises the way France’s colonial past is taught in schools – portraying it in a more positive light and further downplaying the massacres of Algerians in both Algeria and France.

In addition, Prime Minister Dominique de Villepin has introduced measures to expel any arrested foreigner, including legal immigrants. Pension plans for foreign workers have been annulled and programs of financial aid for foreign families terminated.

Corporate tax-free zones in the suburbs have been extended, allegedly in order to increase the number of jobs in these neighborhoods. Although at least 33 percent of their employees must be local residents, many businesses in these zones provide only short-term and part-time work.

Some emergency funds have been allocated to the suburbs, such as 5,000 additional teaching assistantships and greater funding for community organizations, but this comes after 60,000 education jobs have been recently slashed, and association funding cut by anywhere from 30 to 100 percent. On the brighter side, the state will subsidize 20,000 temporary minimum-wage jobs in these neighborhoods.

The center-left Socialist Party has been supporting many of these measures. The Socialist mayor of one suburb stated, “For a Socialist to say that the army should intervene into the rioting neighborhoods is an unimaginable admission of defeat. But we just can’t leave the people like that. At a certain point, one must ask if there is a State in this country.”

On the other hand, left-wing “collectives” that sprang up during their successful campaign to reject the neoliberal European Union Constitution have begun to revive after weeks of embarrassing silence on the issue of the riots. These local groups, bringing together various Communist parties, factions

of the Socialists and Greens, anti-globalization organizations such as Attac, antiracism and civil liberties groups, unions and individuals, have been rebaptized as “antineoliberal collectives.”

The weak response of the far-left parties to the riots points to their abandonment of the impoverished areas of France, and betrays a certain surprise to see the permanent underclass become spontaneously visible.

In a statement issued in early December, the steering committee of the collectives stated, “From the more classical workers’ protests and the political revolts occurring since 1995 to the sedition of the suburbs, there is a total unity of causes…”

It is yet to be seen if the French left, historically paralyzed by its inability to unite and debilitated by its own racism, can pull together a unified program to address the social injustices that are on the rise in France.