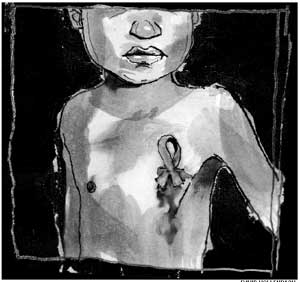 In early 2004, independent journalist Liam Scheff set off a firestorm of allegations against New York City’s Administration for Children’s Services (ACS) and Incarnation Children’s Center (ICC) in Harlem, with an article he posted on indymedia.org. His story, “The House That AIDS Built,” revealed that,

throughout the 1990s, experimental HIV drugs had been tested on HIV foster children at ICC.

Since then, ACS has been under fire from charges of inappropriately enrolling as many as

465 foster children in HIV clinical trials. The agency has also been accused of racism, some

comparing the trials to the Tuskegee syphilis experiment, as 98 percent of children in foster

care in New York City are persons of color.

Justice has undertaken a comprehensive review of the trials in question. While that investigation

is currently underway, ACS has already drafted new protocols for the participation of

foster children in clinical trials, though it insists that no evidence of any wrongdoing in

the past has been found.

Pending approval of the new procedures by the state, ACS will resume enrolling foster

children in trials. Though the new procedures go far to protect ACS from such charges in the

future, it remains to be seen whether or not they will give parents whose children are in

explicit, to ensure that proper consent is obtained and documented, and that children

and parents are adequately informed of a trial’s possible risks and benefits. Enrollment

will also be considered on a per-child basis, rather than the blanket enrollments that

occurred in the past.

According to ACS’ assistant commissioner for the Office of Children and Family Health,

Elizabeth Roberts, the agency will require medical facilities conducting trials to appoint an

independent advocate for each child. On a case-by-case basis, ACS will also bring in an independent

physician who has expertise in the child’s condition, and is not connected with the

trial, to evaluate the proposed treatment.

in a child’s welfare, the case will be referred to Family Court. While this affords an added

measure of due process, it is questionable whether or not a parent who disagrees with the

medical review team’s recommendation would be able to mount a successful case.

As attorney Carolyn Kubitschek told The Indypendent, “I think it would be very difficult

for a parent to win. In that situation, there are already two doctors who say, let’s do the treatment.

One is the child’s treating doctor, who proposes the treatment, and the other is the

independent doctor, who says go ahead and do it. Then there’s the parent, who has nobody on

her side, and no money to hire anybody on her side. It becomes quite one-sided, because the

the evidence into court.”

Upon enrollment in a trial, the child would be assigned an independent advocate, who as stipulated

by federal regulations may or may not be a doctor, by the hospital conducting the trial. “If a

parent or child told us they were unhappy with the independent advocate assigned to the child,

and the child was in our care,” Roberts said, “we would notify the hospital that a new independent

advocate, satisfactory to the family, must be assigned in order for the child to continue in the

Though ICC is no longer licensed to conduct trials, many children are still living and/or

being treated there for HIV. The drugs they are given, particularly AZT, have strong and

often debilitating side-effects. Some of the children living at ICC were removed from

parents would stop giving them the drugs when they would become ill.

On Saturday, Oct. 29, a group called Parents in Action held a protest outside ICC. The ten

picketers marched in a circle outside the front door of the four-story, red brick building, shouting,

“Incarnation, shut it down! ACS, stop drugging our children!” Though they came out to

march, the parents would not speak to The Indypendent for this article because they were

afraid of jeopardizing their cases with ACS.

Whatever the results of Vera’s study, kids are still growing up with HIV, struggling between

the demands of normal adolescence, like school, and the debilitating effects of the drugs they

must take. In fact, many of the clinical trials underway today (as listed on www.clinicaltrials.

gov) are studying the long-term physical, psychological and emotional effects of HIV