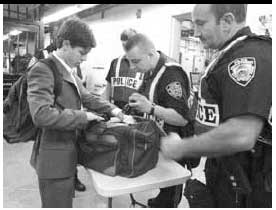 His opinion almost ridicules the NYCLU’s position, while deferring uncritically to the assertions of David Cohen and Michael Sheehan, the NYPD’s intelligence and counter-terrorism commissioners.

It is difficult to equate the “few seconds” of intrusion riders must suffer with the possibility of another terrorist attack, but Judge Berman took a shortcut to the detriment of us all when he found that

the search policy need not actually increase security as long as it has some, minimal deterrent value.

The judge’s cramped view of the issue at stake was evident in August when he took the unusual step of suspending a discovery order issued by a magistrate he assigned to the case. The civil libertarians

hoped to learn just how few stations were being searched on any given day, but the city suddenly became very possessive of that information. Judge Berman capitulated on Aug. 26, saying that,

“given the sensitive nature of the material sought and Plaintiff’s unproven need for the information,” the city need not reveal when and where it was searching.

While the NYCLU’s group of plaintiffs presented some impressive and diverse biographies, Judge Berman’s opinion did not refer to any of their specific objections. Joseph Gehring is a life-long Republican

who, as an attorney, objected to having to open his briefcase and his client’s confidential files to the NYPD. Brendan MacWade, who was on the 40th floor of One World Trade Center on September 11, said

he objected to the policy “because it does not stop terrorists and it takes away our liberty in the name of protecting our safety.” Social worker Joseph Schonebaum was carrying a copy of Sinclair Lewis’s It

Can’t Happen Here, on the day he was searched but the irony was lost on Judge Berman.

Berman accepted as fact Cohen’s hyperbolic statement, “There is no doubt in my mind that the introduction of the bag searches, even though it is random, even though it is not 100 percent, dramatically improves the security posture of the huge, sprawling system which I believe is clearly a top-tier target… right now as we speak.” Nor did he address a suggestion that restoring clerks to all token booths would serve to monitor the entrances without loss of civil liberties.

The NYCLU argued that the Fourth Amendment protects people as well as their “effects,” and the search policy must be minimally intrusive and maximumly effective to pass constitutional muster.

Further, he ruled that the number and frequency of searches was not legally relevant to the effectiveness of the program. “This Court is persuaded that the randomness of the searches rather than the actual

number of searches is primarily what makes the container inspection program effective.”

Minimizing the intrusiveness, he found that submission to the searches is essentially voluntary, and “limited in scope and duration.” In so finding, he relied on instructions given in a July 21 “Finest

Message,” that officers are to check only for explosive devices, not to look for contraband, and to open or manipulate the bag’s contents only “if necessary.”

In this early skirmish, there was no evidence submitted that the searches are discriminatory, and not random. The NYCLU quoted Mayor Bloomberg at a July 22 press conference announcing the search policy, in response to a reporter’s question, “You know, clearly we’ll do it for a little while. It is partially designed to make people comfortable. That’s part of the security thing. You want to make people feel comfortable.”

Let’s hope the Second Circuit Court of Appeals can see the liberty interests at stake.

The People’s Lawyer is a project of the National Lawyers Guild, NYC