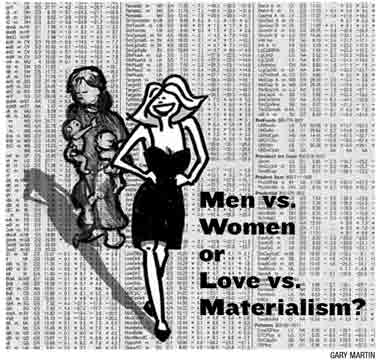 Lovers quarrels often end in passionate sex Perhaps this is what Maureen Dowd had in mind when she picked her most recent fight. The Pulizer-winning New York Times columnist has tossed a Molotov into the battle of the sexes with her new book, Are Men Necessary? This text, and the excerpted article, “What’s a Modern Girl to Do?” have spurred heated debate over the current state of feminism and gender in our hyper-materialistic culture. As Rebecca Traister writes for Salon.com, “Dowd has clearly touched a nerve. And you only touch a nerve by telling a truth.”

Despite the title, Dowd’s most biting critiques are of women, who, she argues, are gold-digging, manipulative, uninspired to work, and construct their identities from handbags and tight skin. Her rips on Starbucks mothers sipping lattes while the kids are with the nanny provide for a smugly satisfying read. Unfortunately, Dowd attributes this to the biological roots of our gender. Shopping is female. Lying poolside is a biological indicator that your man is providing for you. Dowd charges all women with a weakness that only a privileged few are able to consider.

This elitism is compounded by her unwillingness to acknowledge the role media plays. She rails on half-starved, “dithery singletons” like Ally McBeal and Carrie Bradshaw, but does not critique the industry and advertisers they exist for.

Dowd, instead, spends half her book restating biological determinist claims which boil everything down to good ol’ feeding, fighting and fucking. Feeling fat, old and alone? Blame it on biology – men want young, fertile women they can spread their seed with, just like the apes.

For Dowd, it’s not about love v. capitalism, but rather man v. woman with capitalism as the arms dealer. Stakes have been raised, but the rules are the same in the mating game, with Tiffany wedding rings and Manolo Blahniks in hock for sex. Dowd’s conservative streak shines as she genderizes general actions like fighting, playing sports or crying. She asserts that men, and their domains of sports and politics, are becoming feminized. More men are sulking, throwing hissy fits, gossiping and talking about relationships. In addition, “Men are engaging in shrewish, scolding, clawing, vengeful, sneaky, vain behavior.” All of these traits, she associates with the female gender.

Dowd’s conception of what it means to work is also painfully outdated, adding irrelevance to the artificial choices posed in her book. Very few women have the choice between being a corporate vice president or a martini- sipping housewife without a care in the world. She maps her own trajectory of choosing work over family onto society and calls it an “epidemic.” The real tragedy, however, is the number of the overworked and underpaid women who cannot even choose higher education, let alone just being a mom. Projecting your own problems and insecurities is no replacement for serious introspection. Dowd’s scathing generalities allow readers to put themselves above the hated Ladies who Lunch and to avoid any introspection of their own.